Candice Bass-Robinson celebrated her first Gr1 success with Nightingale in the 2017 Majorca Stakes and she was back in the Majorca mix at Kenilworth on Saturday.

That was courtesy of the terrific What A Winter 3yo Clouds Unfold, who continued her march up the ladder with a top-class victory against the best of her sex. 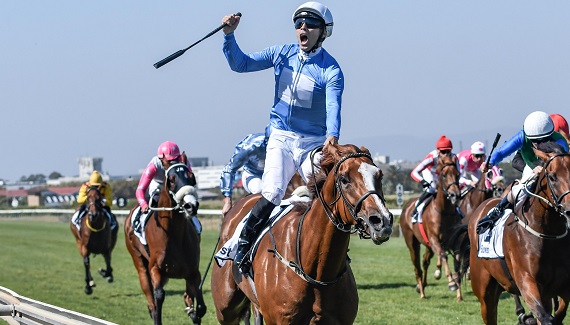 And for Candice, Saturday’s major win – a maiden Gr1 winner for Drakenstein stallion What A Winter – was a massive emotional and psychological strike and a tribute to her famous Dad.

She was but a humble assistant in the years that the brilliant multiple Equus Champion What A Winter achieved his 15 wins from 1000m to 1600m under the guidance of one of the legends of the Cape turf.

On Saturday, Clouds Unfold came in off a perfect prep, she settled beautifully and disposed of three of the best around in last year’s winner Snowdance, the top class Lady In Black and unbeaten 3yo Front And Centre, to register a victory that suggests that the world is her oyster.

Aldo Domeyer rode a peach of a race and had Clouds Unfold beautifully settled, as the talented Snowdance took the fight to her opponents and led her field ahead of Goodtime Gal and Fiorella.

At the 300m , the writing was on the wall for Snowdance as the challenges came from all round.

With Lady In Black and the athletic Front And Centre challenging through the middle, Domeyer sent the white-blazed Clouds Unfold up the outside rail and the chestnut filly came of age properly in front of the ecstatic crowd to grab her biggest success, beating the year older Lady In Black by 1,50 lengths in a time of 98,06 secs.

Front And Centre lost her unbeaten record but absolutely no dignity, going down a head for third, with Fresnaye shading the disappointing Snowdance for fourth. The Drakenstein Stud-bred Clouds Unfold is a first Gr1 winner for treble Equus champion sprinter What A Winter (Western Winter). She is out of Montelissima, a Montjeu half-sister to Listed Summer Juvenile Stakes winner Arria and Gr2 Senor Santa Stakes third Pivotal Pursuit.

The winner took her stakes bank to R1 458 125 with her sixth win from eight starts and 1 place.