A champion who changed lives, legendary sire Dynasty’s passing has left a giant crater in the SA horseracing and breeding landscape.

For the Kieswetter family, and the Ridgemont Highlands Team, everyday life and the business of producing champions goes on across the length and breadth of the lush paddocks of the breathtaking 300 hectare Robertson Valley property that Dynasty conquered and made his domain for fourteen Cape winters. Affectionately labelled ‘a unique character, a great racehorse, a champion sire, and an ultimate fighter’ by Ridgemont Highlands boss Wayne Kieswetter in a press release that rocked the very foundations of our industry on a  bleak Monday ten days ago, the multiple Equus Champion Sire and multiple Gr1 winning SA Horse Of The Year had galloped into the sunset and off to the paddock in the sky – and life as many of us know it would simply never be quite the same again.

Mike Sharkey summed up the character:

“I have worked with a couple of great stallions, National Assembly, Jallad, Badger Land, Jet Master, to name a few. But Dynasty was exceptional, more than special. He was a true gentleman in everything he did from racing to breeding. A great pleasure to work with, he had not a mean bone in his body and was instrumental in raising Highlands to remarkable heights both in the sales ring and on the racetrack. A fighter with a huge heart, he will be immensely missed by us all forever.” Dynasty canters down before his July victory

Still the highest rated 3yo ever to win the Gr1 Vodacom Durban July, the charismatic Dynasty was South Africa’s Horse Of The Year and Equus Champion 3YO Classic Male of 2002. He won nine of just twelve appearances on the track – reeling off four consecutive Gr1 wins when landing the Cape Derby, SA Guineas, Daily News 2000 and Durban July. 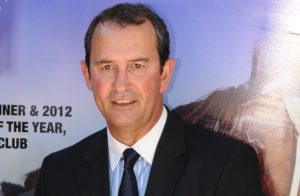 The man who guided him to glory was Dean Kannemeyer:

“He was the most magnificent yearling that I had ever seen and was sold as one of the top priced yearlings. When I put him into training he showed me from day one he could be something really special. He had a great temperament – very seldom do you see that. He was possessed of great natural speed and I started him  over 1600m as a 2yo in open company, which he duly won. I have no doubt he would have won a graded race over 1200m! He is no doubt the best I’ve trained – and I’ve trained my share of classic winners.”

Kannemeyer went on to say that Dynasty was brave and could sit anywhere in a race.

“I still say we never saw the best of him. He was on his way to Hong Kong for the Queen Elizabeth and unfortunately pulled up lame in his final prep. He never raced again. Robbie Fradd, who won The July on him said we should bring him over to Hong Kong – He was adamant: ‘I think he will be too good for them’. What a horse!” Dynasty retired to Highlands in 2005 with the reputation of being a truly exceptional athlete – a rare racehorse of royal quality and world-class ability.

And it was this very reputation that would endure and reach new heights in the historic Highlands breeding barn – a home to champions over many decades.

Dynasty, along with his sire Fort Wood, is one of only three stallions in the history of South African horseracing to celebrate three SA Horses of the Year.

A graceful warrior on the track, Dynasty quickly established himself as one of South Africa’s best stallions – and is without a shadow of a doubt one of the greatest sires ever bred in this country.

Four times Equus Outstanding Stallion, the champion is responsible for over 60 stakes winners and more than 100 stakes horses in total – with his black type performers including 15 individual Gr1 winners – and 28 Gr1 performers in total. Dynasty’s progeny have won most of South Africa’s major races and his legacy looks set to continue with his growing number of sons standing at stud including Act Of War, Futura, Legislate, Jackson, Horizon and Irish Flame. And we already  experienced the perennial Dynasty spirit over the past weekend when the star reached the milestone of producing his first stakes winner as a broodmare sire when the aptly named Divine Odyssey – an Oratorio son of Dynasty daughter Divine Right- steamrollered his opposition to win the Listed Drum Star Handicap at Turffontein on Saturday.

Just 24 hours later, and closer to home, Dynasty’s freshman sire son Legislate celebrated the honour of producing the second top-seller at the Cape Yearling Sale from just 5 lots on offer when Hoedspruit, a handsome colt closely inbred to Sadler’s Wells, attracted the attention of bidders.

Days after his sad passing, Dynasty remains in our hearts and in the news. And that is where he will stay forever. Wayne Kieswetter had the last word as he paid a final acknowledgement of respect to the Highlands hero.

“This wasn’t the end – it’s only the beginning. Our greatest tribute to Dynasty is to continue the great tradition of producing the winners. Cheers to our champion, and long may his Dynasty continue.”