I am a firm believer in the adage that the horse finds you.  Even when you don’t know you are looking.  As it turns out, these might be the best ones of all.

So a few months ago, there I was, minding my own business and absolutely not looking for another horse, when I received a phone call from Teresa Esplin, Kenilworth Racing’s Racing Liaison Officer extraordinaire, that The Conglomerate was being retired and looking for a new career.

I’d always loved Joey Ramsden’s classy black charge on the track, but of course I see a lot of nice horses and it’s easy to fall in love several times over every race meeting.  However, there are always a few favourite favourites that stick at the back of your mind.  The Conglomerate was one of them.  But liking a horse is one thing.  Having them like you back is quite another.  However, he was a July winner and making sure our big horses find soft landings is something of a passion of mine, so the opportunity was just too good to pass up.

Auspiciously (amazing how one can invent signs when you need to!), I’d stopped to do a quick grocery shop on my way to the office that morning, and happened to have a large bag of carrots in my car.  What’s a girl to do, right?  I rang the Ramsden yard and made an appointment that very afternoon.

I snuck over to Milnerton in my lunch break where Stef Grentell and the team had The Conglomerate ready for me to look over.  I explained that I absolutely, positively was not in the market for another horse, but needed to meet him in person just to make sure he wasn’t ‘my’ horse, but promised that I would try and help network him instead.  He stood politely while I checked him out, but didn’t seem particularly interested in this new, slightly over enthusiastic human.  Having satisfied myself that he was indeed still rather fabulous, but not at all sure that the feeling was mutual, with Stef’s permission I offered him a carrot and stood back to see what he would make of it.  He accepted my gift politely, crunched his way through it and then quite literally towed his groom over to come and say hello and see whether I had any more.  And that, as the old joke goes, is when the trouble started…..

The Horse Finds You

I thanked Stef, reiterated that I was not in the market for a new horse and promised to do my best to help him find a new home.  And I did.  I really did.  But whether it was the time of year, the economy or any number of other factors, there were a few tentative bites, but nothing quite seemed to work out.  His stable mate Shades Of Indigo was quickly snapped up by Linda Mohr where he is being produced as a new lead horse for our big racing meetings (keep an eye out for him and Thomas Mbalula  next season), but every few weeks I’d ring up to check whether my glamorous black friend was still available and every time Stef would confirm that yes, he was still looking for a home. 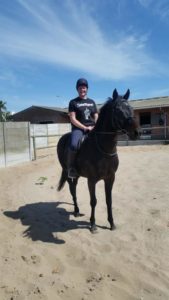 Sitting on a July winner is definitely a thrill

There was nothing for it.  With co-conspirator Teresa Esplin in tow, we went down to have a sit on him and try him out properly and confirm that yes, he was even more fabulous under saddle.  But there was more.  Any idiot could guess that sitting on a July winner is a thrill, but this particular one inspires such a sense of joy and courage (that one took me by surprise) that you feel you can conquer the world from his back.  Which was really not how I’d planned things to turn out…..

The first problem was that I already had two horses and struggled to find the time and money for them – there was definitely no room in my day – or my wallet – for another.  The other problem was that my husband had threatened that my next horse came with a free divorce – rather prescient, as things turned out – but the gnawing at the back of my mind was developing a bite.

Not all heroes wear capes

Winning Form are wonderful about supporting race horse welfare as well as supporting and sponsoring our trainers and jockeys.  In a moment of either madness or sheer inspiration, I decided to ask whether they might be interested in sponsoring a special OTTB in his second career.  And in a moment of equal inspiration and generosity, they said yes and the 2016 Vodacom Durban July winner officially became known as Winning Form’s The Conglomerate! As if by magic! TC and Anna (photo: Petrus van Graan)

So we had the finance angle figured out, but I still needed someone to help with producing him.  But it’s funny how solving one problem often leads to the rest of the dominoes falling into line as well.  As if by magic, fellow yard mate Anna Herholdt had just decided to start the search for a new horse.  I mentioned TC, she thought he sounded just the ticket and presto! It was agreed that we would co-parent him.  And so, in one of those wonderful stories that really showcases the very best about horse people, team work made the dream work.  He has been thoroughly spoilt – Stafford Robinson, body worker par excellence, donated a free NIET treatment, African  Horse Carriers sponsored his transport, yours truly sponsored him a smart new head collar and lead rope and The Conglomerate got a home for Christmas. So as it turns out, you don’t find a Joy Luck Dragon, they find you.

On that note, I should point out that as one might expect with such a big horse, he remains under watchful eye of the Ramsden and Mayfair teams, forging new friendships as we navigate the next chapter with this special horse together.

While it might seem a bit optimistic to expect The Conglomerate to settle into his new life without any fuss, that’s exactly what he has done.  He is not only an utter joy to be around, he inspires it in everyone he meets.  He is funny and clever and has this magical way of binding people together, with one notable exception…..

You Get The Horse You Need

I did end up getting that divorce with the deal.  While one can’t help seeing the funny side, it is sad to realise your cornerstone has become a millstone instead (and annoying when they take useful things such as their toolbox with them, just when you are doing some important DIY).

Which led me to draw some interesting parallels.  Horses are a symbol of freedom and independence and represent the ability to get from one place to another faster.

Tools are similar – they help you do things you could not easily do by yourself.  And so a good toolbox is also a set of keys to all sorts of possibilities.  And while I always knew the first bit, I really only came to appreciate the value of a good set of tools when I started doing some home improvements recently.  But more on that in just a bit.

Fortunately horses have a way of keeping you grounded.  Firstly, they make you show up – important for those pity party days.  Secondly, they demand your full and unadulterated attention – handy for keeping unwanted thoughts at bay – and lastly, sitting five feet off the ground really helps you see things from a different perspective.

That perspective has brought an avalanche of new opportunities, adventures and friendships and strength, support and fun from some of the most unexpected places, not least of all, The Conglomerate himself.  And instead of us teaching him, it seems he’s the one teaching us instead.  So while change is hard, if you have to kick on into a new chapter of your life, there are worse ways to do it than on the broad black back of a Vodacom Durban July winner! 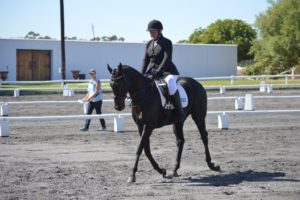 On his way to earning 62% (photo: Pia Williams)

While his primary job will always remain being a Joy Luck Dragon, owning a horse like The Conglomerate is a huge responsibility and the intention is to produce him for the dressage and show ring and as a general ambassador for OTTB’s as part of a retirement initiative I have been working on for some time.

There is still a long way to go, obviously one does not transform a racehorse overnight, but he has been sailing through his early lessons under the watchful eye of super coach Kim Bosman.  So much so, that Winning Form’s The Conglomerate braved his first show at Europa on 24 March.  The show organisers gave him a warm welcome, announcing him as the 2016 Vodacom Durban July winner and wishing him well on his second career debut.  While our nerves were shredded, a few nervous dressage ladies are nothing after the excitement of Greyville on a July afternoon and he kept a cool head a steady track, exceeding even our wildest dreams by coming home with 61 and 62% for his tests respectively.

This past weekend, which happened to coincide with some early birthday celebrations for yours truly here, we tried our hands at showing at the Young Horse Show in Stellenbosch and again, Winning Form’s The Conglomerate did us proud, handling the travel, the new environment and all the new challenges well in his stride, accumulating new fans as he went. 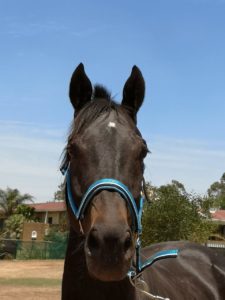 Having dragged some of the family to meet our star, at the post show / pre-birthday celebratory gathering, the discussion naturally ran to horses and the fact that there are horse people – standing outside in the sweltering sun – and then the rest of the world – sitting in a nice restaurant having a civilised lunch.  Of course the joy is that family overcomes all and I’ll be damned if I wasn’t presented one of the finest sets of tools I have ever laid eyes on as an early birthday gift.

Me?  I’ve got a little black dress, a big fancy ride to take me anywhere I want and with all the tools I need to help me solve just about anything, the world really is my oyster.

3 comments on “For Better Or For Horse”