A number of well performed and blue blooded stallions are set to be represented by their first runners in South Africa this season. Another well performed stallion, who also sports an excellent pedigree, set to be represented by his first runners in South Africa this season is the Ascot Stud based Global View.

A son of the world’s premier sire Galileo, Global View made an instant impression in the sales ring this year. Not only was he responsible for a first crop yearling colt making R1 300 000 at the 2019 Cape Premier Yearling Sale, but the multiple graded stakes winner was the Leading First Crop Sire, by aggregate, at the recent Emperors Palace National 2YO Sale.

In what has proven a tough market, Global View had two colts make in excess of R400 000, a notable achievement for an unproven stallion today. His son out of Rozelana made R450 000, while a Global View colt out of Princess Magdalena was a R425 000 buy. Winner of the Gr3 Generous Stakes at two, and Gr2 Crown American Turf Stakes as a sophomore, Global View has plenty to recommend him.

Ascot Stud’s Ashley Parker said of the decision to buy Global View: “We had just lost Sail From Seattle to colic, and I was very keen to acquire a son of Galileo from a fast family. Alistair Brown found Global View in North America – his dam (Egyptian Queen) had been a very expensive yearling who injured herself. Covered in Ireland, Egyptian Queen returned to the USA where she foaled a rare American Galileo colt.

“Global View has proved an easy stallion to mate, and he covered three quality books in his first three seasons at stud. Ascot will again be sending him 25 mares this season and I am hopeful they run as well as they look! His first crop have been purchased by many prominent owners and trainers, and I am confident they will receive every chance of succeeding.”

Global View is a horse with an intriguing pedigree in that he is inbred to the important taproot mare South Ocean.

The latter is not only dam of Storm Bird – whose great sire son Storm Cat is broodmare sire of Global View – but South Ocean is also fifth dam of Global View. 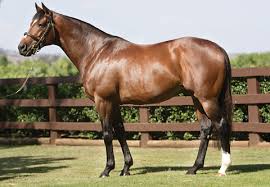 Global View’s sire Galileo – who produced his 300th stakes winner this year – continues to dominate racing all over the world, and at the time of writing, is on track to record his 11th General Sires title in GB/Ireland.

The remarkable son of Sadler’s Wells has had another superb season in 2019, with Galileo’s feats including a fourth Investec Derby win courtesy of his son Anthony Van Dyck.

Galileo is responsible for earlier Derby winners in the form of New Approach (sire of Investec Derby hero Masar), Ruler Of The World and Australia. Ruler Of The World seen winning the Investec Derby in 2013

In a further show of dominance, Galileo sons ran 1-2-3 in this year’s Irish Derby, while all but one of the runners in this year’s Gr1 Investec Derby were sired either by Galileo or one of his sons/grandsons.

This dominance looks set to continue, with Galileo two-year-olds already making a big impression this year, thanks to pattern race winners like Armory and Love, with a host of well-bred prospects still in the wings.

Galileo’s growing number of high-class and promising sire sons include all of Frankel, New Approach, Teofilo, Australia, Nathaniel (sire of, among others, Enable), Intello, and Gleneagles – to name but a few, and their influence promises to grow from strength to strength. Storm Cat mares have built up an impressive record when mated to Galileo, with that cross already responsible for Gr1 winners Ballydoyle, Misty For Me, Decorated Knight, Happily, Marvellous, Churchill, Clemmie, and Gleneagles.

The latter, a dual Guineas winner and own brother to Gr1 winners Marvellous (Irish 1000 Guineas) and Happily (Champion 2YO Filly), has made a very bright start with his first two-year-old runners this season including Gr2 July Stakes winner Royal Lytham and Windsor Castle Stakes winner Southern Hills and three other black type performers, and Gleneagles is currently one of the Leading First Crop Sires in GB/Ireland for 2019.