With a sensational five Gr1 victories to her name during the 2018-19 season, superstar Karaka graduate Melody Belle (NZ) was a runaway winner of the New Zealand Horse of the Year title at Sunday night’s awards ceremony at Ellerslie Racecourse.

Bought by Te Akau Racing principal David Ellis for NZ$57,500 at the 2016 Premier Sale, Commands’ daughter Melody Belle made an immediate impact with brilliant victories in the Karaka Million (1200m) and Gr1 Manawatu Sires’ Produce Stakes as a two-year-old.

From 61 votes cast in Horse of the Year voting, Melody Belle received 59. 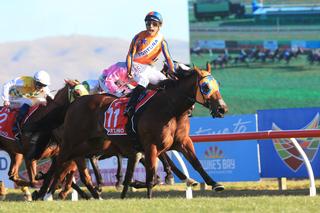 The Jamie Richards-trained mare won six of her eight starts during the 2018-19 season and earned NZ$701,500 for owners the Fortuna Melody Belle Syndicate. That amount is more than 12 times her purchase price.

Overall, Melody Belle has had 22 starts in her career for 12 wins, seven of them at Group 1 level. She has earned NZ$1.75 million – more than 30 times her purchase price.

Danzdanzdance (Mastercraftsman) was named Champion Middle Distance Horse. Bought for only NZ$5,000 at the 2016 Select Sale by syndicator Kylie Bax, Danzdanzdance claimed a Gr1 double in 2018-19 in the Rydges Wellington Captain Cook Stakes (1600m) and Zabeel Classic (2000m). She also collected Group 1 placings in the Livamol Classic (2040m) and New Zealand Stakes (2000m), along with a third placing in the Gr1 Ranvet Stakes (2000m) in Sydney.

The age-group categories were taken out by Yourdeel (NZ) (Dundeel) and Madison County (NZ) (Pins).

Champion Two-Year-Old Yourdeel was a NZ$100,000 purchase at Karaka 2018 Book 1 by part-owner Chris Rutten. Trained by Jamie Richards, he is the seventh champion two-year-old to come from the Te Akau stable.

Madison County, who was named Champion Three-Year-Old, was bought for NZ$36,000 at the 2017 Select Sale by owners the China Horse Club. The Murray Baker and Andrew Forsman-trained gelding placed in all of his other starts, including the Karaka Million 3YO Classic (1600m) and the Gr1 Australian Derby (2400m) in Sydney.

Pencarrow Stud and New Zealand Bloodstock principal Sir Peter Vela was awarded the Owners’ Premiership at the 2018-19 New Zealand Thoroughbred Horse of the Year Awards at Ellerslie Racecourse on Sunday.