Trainer Gavin van Zyl produced the Black Minnaloushe gelding Blackball in fighting trim after a 19 week break when the 5yo picked up a first stakes success with an authoritative victory in Sunday’s R150 000 Listed Michaelmas Handicap at Hollywoodbets Greyville.

Easy to back at 6’s, the SP weekend cover star and half-brother to the ill-fated SA Derby runner-up Rocketball from the same yard, produced a sustained finish to record a meritorious victory. Trainer Gavin van Zyl labelled Rocketball a ‘proper horse’ and said that getting hampered and knocked about in his last start had derailed plans.

“Richard Fourie got off last time and said he should have won. He pulled up with a bit of wear and tear there. So we rested him. He is an honest and solid horse and I’m glad he has bounced back so well. Hopefully he can build on this. We haven’t seen the best of him,”said the former jockey. 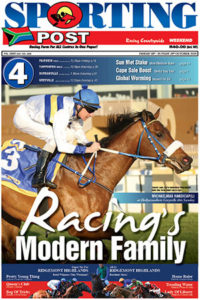 The lead in the 1900m turf feature changed just off of halfway with Calvin Habib taking the fancied White Lightning up to lead after Silver Rose was adjudged to be doing things a bit easy up front.

Into the home run, the disappointing White Lghtning stopped and fell away to nothing as Warren Kennedy sent Blackball on his way.

A 2016  Val De Vie Yearling Sale graduate, the Shirluck Stud-bred Blackball is a 5yo gelded son of Black Minnaloushe (Storm Cat) out of the twice-winning Kabool mare, Kite Runner.

Having registered a first stakes success here, Blackball has won a total of 5 races with 8 places from 26 starts for stakes of R516 300.