Racing at Meydan returns this evening when, for the very first time, the world-famous racecourse hosts the initial meeting of the UAE season, kicking off the 2019-20 campaign with a six-race card.

The entire sextet will be contested over the same dirt surface as March’s Gr1 $12 million Dubai World Cup sponsored by Emirates Airline, which is also the sponsor of the entirety of the opening night meeting. The evening is highlighted by two AED 185,000 handicaps, but the most anticipated race is arguably the first of the season, the Emirates Holidays,  a 2-year-old maiden event over 1200m for the classic generation of 2020 that features seven aspiring juveniles.

Won last year by Phoenix Ladies Syndicate’s Ahmad bin Harmash-trained eventual 2000 Guineas Trial winner Walking Thunder, this year’s edition is led by the same connections’ Mambo Mischief, a son of one of the top dirt sires in the world, Into Mischief, who was purchased for $150,000 at the OBS April sale in Ocala, Florida.

Also creating some buzz is Cosmo Kramer, from the same connections that provided 2017 Al Bastakiya winner Cosmo Charlie, who will have the services of Pat Dobbs for trainer Doug Watson. The Munnings colt is a son of Puerto Rican champion Gabbywitha G. 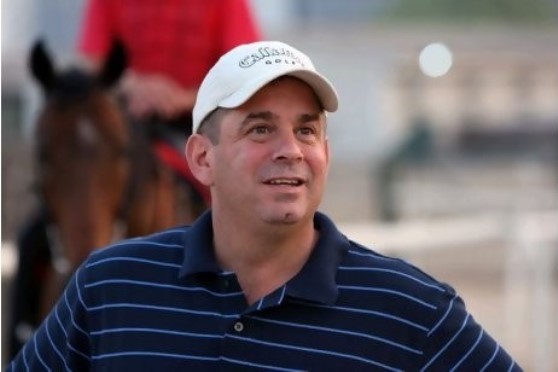 “He tired when trialling, but went well enough,” Watson said. “We have been pleased with him since and it will be interesting to see how he goes, but he looks really well.”

Also lining up will be His Highness Sheikh Ahmed bin Rashid Al Maktoum’s Nicholas Bachalard-trained Laa Baas, a well-intended Tattersalls Craven Breeze-Up Sale purchase in April who will be ridden by Tadhg O’Shea, the new stable rider for Jebel Ali. The Oxbow colt is the first foal out of Charlies Love, an unplaced Indian Charlie half-sister to Mendip, winner of six races, five on Tapeta at Meydan and headlined by his 2012 victory in the Gr2 Al Maktoum Challenge.

His Highness Sheikh Hamdan bin Mohammed Al Maktoum’s silks will be carried by Royston Ffrench for Salem Bin Ghadayer aboard Attribution, a Competitive Edge colt also sourced at the Ocala Spring Sale, where he cost $180,000.

Intriguing Satish Seemar pupil Barack Beach, a son of the wickedly quick Daredevil from a strong sprinting family, will have Richard Mullen in the irons. Barack Beach is owned by H and B, who also have Ali Rashid Al Rayhi-trained Al Modayar, who will have Fernando Jara in the saddle. Helal Al Alawi-trained Puzzle Elegance completes the field with Pat Cosgrave back in town from Australia to ride.

The first of two featured handicaps, the emirates.com over 2000m, looks particularly competitive with a field of 11 declared, including Top Clearance.

Representing the aforementioned new alliance at His Highness Sheikh Ahmed bin Rashid Al Maktoum’s Jebel Ali Stables of Nicholas Bachalard and UAE Champion Jockey Tadhg O’Shea, the 7-year-old gelding had won twice in his native USA, where his final start was a fifth-place finish in the 2015 Gr1 Haskell Invitational Stakes behind Triple Crown-winning superstar American Pharoah. Since, Top Clearance has done respectably to finish eighth in the 1600m Gr1 Al Maktoum Challenge on his local debut before landing a handicap over the same course and distance in January 2016. The son of Majestic Warrior added a second local victory, stretching out to 1950m, at his home track of Jebel Ali in March 2017, but has yet to add to his winning tally. He races on Thursday off a career-low handicap mark.

“He seems in great form at home and we are very happy with him,” O’Shea said. “He is, basically, as fit as we can get him without a race, so we are hoping he can run well in what looks a strong handicap.”

American Doug Watson saddles three of the opposition seemingly headed by Big Brown Bear, the choice of stable jockey Pat Dobbs and a horse the trainer and his team at Red Stables have always held in some regard. Victorious in a 1400m maiden at Meydan on his seasonal return last November, the 4-year-old was then denied by a neck in a 1600m course maiden before winning a 2200m handicap, again at Meydan, before struggling in his final two outings. He is joined in the field by stable companions Grand Argentier and Silken Dancer, the mounts of Pat Cosgrave and Sam Hitchcott, respectively.

“All three are in good shape at home,” Watson said. “We have gelded Big Brown Bear over the summer and he looks great at the moment. If Grand Argentier breaks well, he should have a chance, while Silken Dancer is returning off a long break and will certainly benefit from the run, but we are happy with all three.”

The weights are headed by Firnas, representing the always-respected Salem bin Ghadayer and Royston Ffrench combination. Welford, the mount of Richard Mullen, is another to fear for Satish Seemar.

The 1600m handicap, the Emirates Airline, has attracted a field of 12, with Portamento attempting to concede weight to his 11 rivals. Fernando Jara rides for Ali Rashid Al Rayhi on the 7-year-old who has not competed on dirt since chasing home Galvanize over this 1600m course and distance last December.

He is owned by Mohammed Khalifa Al Basti, as is George Villiers, representing Seemar and Mullen and successful over track and trip at the beginning of March.

However, arguably the most interesting of the dozen runners is Sheikh Ahmed and Bachalard’s Giant Hero on what will be just his second UAE and third career outing. The only 3-year-old in the race, the Giant’s Causeway colt arrived at Jebel Ali Stables having won his sole USA start, over 1000m at Ellis Park as a juvenile in July 2018 for trainer and Dubai World Cup winner Steve Asmussen.

His local bow, in the UAE 2000 Guineas Trial, was somewhat disappointing when well beaten in the race won by Walking Thunder, but he has been given plenty of time subsequently and this will be his first start for 287 days.

O’Shea said: “He has plenty of pace this horse and has been working well, but he is only three and inexperienced taking on some older seasoned handicappers which is never easy. The race should tell us a lot about him and how to plan the rest of his campaign but he is one I am looking forward to riding.”

6 comments on “Meydan Returns This Evening”