The lesser fancied of the Justin Snaith duo, Casual Diamond had run second in this event in 2017 and third in 2018, and was a courageous winner under an incident filled ride by Robert Khathi. The hardworking jockey picked up a seven day suspension for causing interference to runners down his inside at the 350m marker. But he got the job done and caused an exotic blowout – for non SP readers, that is – on a day of well behaved results. 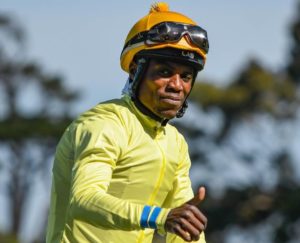 Mushi Sterek led Lesedi La Rona and Celestial Storm early, but in a stampede to the line Casual Diamond ran on gallantly to thwart Mushi Sterek by 0,75 lengths in a time of 65,76 secs for the 1100m.

The consistent Freedom Charter finished best of the Bass-Robinson quintet to run on well late for third.

Dennis Drier would have been pleased with the return run of the 13 week rested In The Stars, who was a head back in fourth.

The favourite Boomps A Daisy never showed and finished a 7 length ninth.

3 comments on “Nothing Casual About Khathi”