Terrance Morgan Millard was born in Cape Town on Sunday, 15 December 1929.  He passed away peacefully at his home in Sunset Links on Wednesday, 20 November 2019, less than a month shy of his 90th birthday.  He filled his time with an incredible variety of things – friends, family, travel and adventure – but principal among these was horses. To racing pundits Terrance Millard is best remembered as one of South Africa’s most dominant racetrack forces.  Aged 24, he was granted his professional trainer’s licence in 1954, saddling his first Queen’s Plate winner, Laddie, shortly after.

It wasn’t entirely smooth sailing, but from there, his CV is formidable.  Before retiring at the end of the 1991 season, he amassed 2,257 winners, 117 Gr1’s, a Summer Cup, six Met, Durban July and Gold Cup titles and seven SA Champion Trainer awards.

As his Argentinian trips testified, he was a bloodstock selector extraordinaire, he had a racing feed named after him and was dubbed ‘The Oracle’ by the SA Racehorse team, to select just a few highlights from his extraordinary 37 year career.  He surely stands alone as one of the giants of the South African turf.

While I am sure I made his acquaintance during his training heyday, it was not until a few years ago that I had the privilege of truly getting to raid the brain and memory bank of one of our racing greats.  I always deferred to him as Mr Millard, not because he demanded it, but because one naturally afforded him that respect.  Pressed for the secret of his success, he would always shrug, “I just like horses, you know?  And I got lucky.”  And perhaps what made him so staggeringly successful was that behind the trophies and titles and framed big race photos, was someone to whom horses were as integral to life as breathing.

From grooming ponies in the morning before school, to stunt riding, to show jumping and dealing horses, playing polo, to amateur racing, professional racing and breeding, to carriage driving, to breeding champion Hackney ponies, Terrance did it all.  That burning fascination for the horse never dimmed and it was all inclusive.  I will never forget him asking after my modest little crew, carefully studying my shyly proffered photos and instantly picking out the more successful ones.  That he reserved his warmest compliments for my Warmblood mare is a memory I still treasure.

As we talked horses, breeding, racing, family, friends in common, and, of course, more horses, the invitation to tea ran to lunch, dinner and finally saw me leaving at midnight.  In fact, it became something of a pattern of our visits that I seldom got out of there in under half a day, but that’s what horse folk do.  No matter what age, profession or nationality, they remain insatiably curious about horses and a horseman’s true currency is stories.  And boy did he have some greats.

It would be impossible to do justice to them all, but son-in-law Geoff Woodruff was kind enough to share some of his memories. 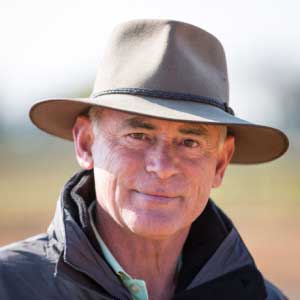 “My earliest recollection of him was when I was still working for Ralph Rixon (Terrance’s brother in law).  I always found Terrance to be a very pleasant man, courteous to everybody.  I liked him as a person before I knew how good he was as a trainer and he was just coming to the height of powers when I came to the country, probably around 1982.”

“I think possibly what I’ll remember most is going to Sea Lodge for supper the night Carol decided it was time I asked Terrance for permission to pop the question.  I was terrified.  I saw him struggling with the horsebox, so I went out to help.  When I came back, Carol said, ‘Did you ask him?’  I said no.  So she said, ‘Daddy, Mummy, come here.’  They sat down and she said, ‘Geoff and I want to get married.’  Joyce I think knew, because she smiled.  Terrance’s mouth opened and closed a few times and then he said, ‘Wonderful, but are you sure you really want to take her on?’ he chuckles.

“Horses were Terrance’s overriding passion in life – all sorts of horses, not just racehorses,” he continues.  “He loved cart horses, he actually was a successful Hackney breeder and he once even had Lester Piggott driving his Hackney in his buggy at Montana Farm.  There’s a picture of it somewhere.  I’d love to see it again.  Lester in all his glory!”

What made him so formidable?

“A thing a lot of people didn’t realise was that when he was dealing with the horses, everything was done to the nth decree.  There was nothing that was skipped, nothing that was missed.  He always said, ‘Don’t look for what’s right, look for what’s wrong,’ so that was the sort of almost military approach.  When he looked at a horse, he’d start from the feet and move his way up, and if he got to the top and had a sparkle in his eye, then you knew the horse was alright.” 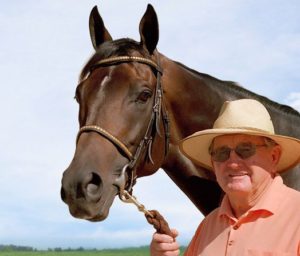 Terrance booked his first visit to Argentina in the mid 1970’s and returning with Dandy Sun and Sandunguera, began a happy relationship that would span many years and produce nearly half his final tally of Gr1 winners.  He credited the strict TBA import restrictions imposed at the time as invaluable in teaching him how to buy good horses and it was something he continued with great success for Tony and Geoff after he retired.

Geoff remembers, “I loved travelling to Argentina with Terrance and the likes of Des Scott, James Drew and Mike Fullard.  They were really brilliant, brilliant trips.  I learnt so much.  He found me some absolute champions in Argentina.  He showed you the best farms and said be careful of that farm and that’s a good farm – stuff that’s priceless to a trainer.”

One particularly memorable consignment of 9 included Resfa, Logetta, El Picha, Igreja, Lovely Halo and Piangere.  “Between them, they won over 40 races and they all got black type apart from Piangere, that did a tendon,” marvels Geoff. 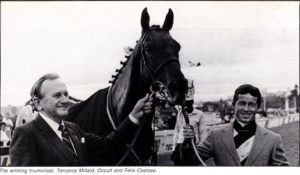 “He had top jockeys and Bert Abercrombie, Duncan Alexander, Felix Coetzee and Mark Sutherland were probably his most successful riders.  He and Felix probably struck up the most fearsome combination.  Felix’s dedication to his work suited him very well to working with Terrance and between them they were a formidable pair.  Felix was a very good judge and if Felix liked the horse and Terrance liked the horse, 99 times out of 100 it would win.”

However, this did lead to difficulties when others didn’t also see things his way.

The July That Wasn’t 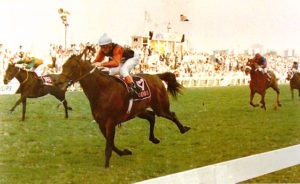 Castle Walk makes a point in the Gold Cup

Having won the 1988 KZN Derby with Castle Walk, Terrance was apoplectic at the horse being excluded from that year’s July field.  So much so, that he threatened to boycott the July dinner.  Geoff recalls, “You want to get as many into the July as you can, if they’re good enough and Castle Walk clearly was.  Terrance wanted to run him in the July and Gold Cup, that was his plan and now he had to change it and he was not pleased.”

Having been persuaded to attend the dinner, Terrance delivered a short, sharp and, with assistance from Geoff, heavily edited speech, making no bones about his displeasure.  “Afterwards he said, ‘Now you watch, I’m going to prove a point to these bloody people, this horse is going to win the Gold Cup.’  And he did.  Easy,” grins Geoff. Terrance produces another 1-2-3 in the 1990 Rothmans July

“The Thursday before the 1990 July, he showed me the blood counts of the July horses.  He said, ‘This is good enough for 1-2-3, you know.’  That’s how accurate he could be.  That’s why the bookmakers dreaded him when he started pulling out those horses.”

After handing over the reins to a very strong string to Tony at the end of the 1991 season, Terrance settled into retirement.  “I still believe he retired too young,” opines Geoff.  “The thing is he was kind of semi retired.  He helped me, he helped Tony.  We literally dismantled the barns and stables when he sold Sea Lodge and rebuilt them on our place at Montana Farm.  We had 80 stables, a big barn, a tractor shed…  It was magnificent.”

With his prodigious experience and enquiring mind, Terrance was not only generous with his knowledge, but willing to put his shoulder to the wheel too. “When I first started training at Montana, we had a rounded track.  It only had a 600m straight on a slight incline, but I thought we were doing pretty well off it.  We’d been there about a year and a half and I took three horses to Milnerton one day and all three won – two from the front, the other from the middle over 1800m in a very fast time.  Terrance came to the stables on Thursday morning and said, ‘That was alright yesterday, but your horses aren’t fit, you know. They’re good enough, but not fit enough, you can get them fitter.’”  He then set out designing and laying out a 1000m track.  It required permission from the neighbouring farmer, redirecting a stream and some serious earthworks, but Geoff says proudly, “You can ask Mark Khan, Andre Hoffman, possibly even Mark Sutherland what’s the best sand track they ever rode on and they’ll tell you it’s the one we had there.  Off that track, on Met day 1997, Igreja won against the colts by 4.25 lengths first time out breaking the class record under Mark Khan.  Mark also rode Common Ground and broke the course record in the J&B Reserve Stayers on the same day.  It was all Terrance’s brainchild.  We loved that track, we used to take such good care of it and it used to take care of us.  I miss that place.  I think Terrance missed it too.”

In the nebulous endeavour to find the meaning of life, one is always encouraged to make a difference and leave something to mark one’s passing.  At a time when there was far less racing and off a string half the size of today’s dominant yards, Mr Millard cast a shadow that might never be equalled.

Geoff concurs.  “I haven’t seen his like again.  I certainly haven’t seen anyone so dominant.  He just had such a long run at it.  We’ve all had our turns at the top, but it’s bloody hard to stay there and it’s tiring.”

“He always maintained 80 horses was his best number and said if a trainer is worth his salt, he can win the championship with 80 horses, one doesn’t need more.  And when you’re winning it with a strike rate of 26% off 80 stables, boy oh boy, that’s a testament.  I think that’s how it should be done.”

“He was fantastic and a huge influence on my life.  He always treated me like a son and I regarded him as a father figure.  He was my champion.”

De Kock – Should Grab A Tenth