Summerhill Stud’s Act Of War, whose first crop are two-year-olds this season, was one of the very best sons of former SA Horse Of The Year and champion producing sire Dynasty.

He produced his first winner from his first runner at Fairview on Friday when his Piemonte Stud-bred son Daichi made a winning debut over 1000m for Gavin Smith in impressive fashion. 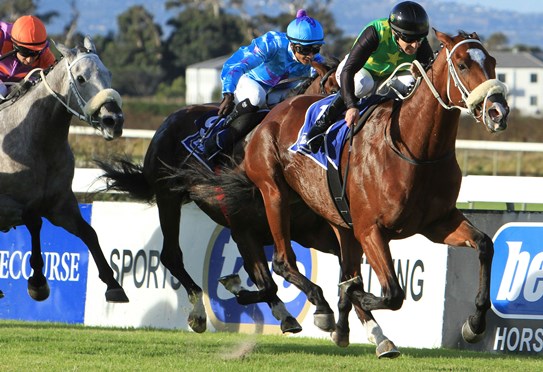 Under jockey Marco Van Rensburg, the Act Of War colt kept going gamely to record a half length win in a time of 57,42 secs.

A R70 000 buy from the 2019 Emperors Palace National 2YO Sale, Daichi is out of the two time winning Captain Al mare Darrie. His connections picked up a R60 000 Bloodstock SA Value Added Bonus for the victor.

His sire Act Of War won eight of only 12 starts for Joey Ramsden, with his six graded victories including a triumph in the 2014 G1 Cape Guineas, as well as scores in all of the Gr2 Selangor Cup, Gr3 Kuda Matchem Stakes, Gr3 Langerman and Gr3 Cape Classic.

Act Of War, who won graded races at two, three and four, is one of seven winners produced by the stakes placed Cordoba mare Si Senorita.

The latter, also dam of Gr3 Langerman winner Subastador and Listed Off To Stud Handicap winner Luna De Victoria, was South Africa’s Broodmare Of The Year in 2014-2015.

Act Of War stands at Summerhill – his fee is available on application.