Nobody got rich when Dennis Drier’s Silvano gelding Wealthy popped up at 22-1 to win the R150 000 Listed Michael Roberts Handicap last year and we are looking for a happier outcome this time round with the 7yo back to defend his title at Hollywoodbets Scottsville on Sunday.

The Michael Roberts raceday honours one of the greatest jockeys produced in this country and all of the racenames on the day – from Mtoto to Sledgehammer to Super Quality – bear some historical significance in an illustrious career. 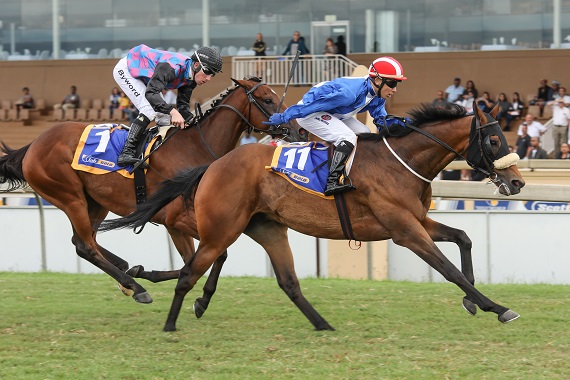 The SP top-rated runner, Wealthy still shows plenty of enthusiasm for his racing – despite not having seen the winner’s enclosure since his shock score over Dark Moon Rising last year. He appears to come good in January though and has held form since running third in the Listed Michaelmas Handicap in October behind Blackball.

Gold Circle reported earlier in the week that Wealthy is in fine shape ahead of his bid to retain his Listed Michael Roberts Handicap crown.

The bay gelding is now a seven-year-old but is a typically evergreen son of Silvano and after three good comeback runs this season the bookmakers might have been more wary. However, once again he is a long shot and is quoted at generous odds by Hollywoodbets.

His merit rating has come down one point this season from 99 to 98 and he carries a nice galloping weight of 54,5kg. He also has a good draw of five in the 14 horse field. Last year off an 85 merit rating Wealthy was 1kg under sufferance and won by 0,75 lengths from Dark Moon Rising, who carried 60kg. He faces the latter horse on identical terms. Dark Moon Rising is returning from a layoff, yet he is quoted at 10/1.

Wealthy is effectively only one point higher in the merit ratings for this year’s race compared to last year as the 1kg he was under sufferance and the across the board ten point raise at the beginning of the season must be taken into account.

Dennis Drier’s assistant trainer Stuart Ferrie told David Thiselton, “He is very well. His last three starts have been very good and he’s honest. He’s well drawn not that it makes that much difference because he comes from off them anyway.”

Brett Crawford’s G G’s Dynasty is a model of consistency and is well poised for his first stakes success after cantering in last time to beat Walter The Penniless over 150m shorter at this track. With the 1 draw and Anton Marcus up, this winner of 5 of 13 starts looks to have plenty in his favour. Born To Perform is another fellow that is going places after a shaky start to his career. Dennis Bosch has got him on song and he meets G G’s Dynasty on a kilo better terms than when beating him by 1,75 lengths over 1400m at Hollywoodbets Greyville in early December.

Michaelmas Handicap winner Blackball took his time to get going when beaten 1,25 lengths by The Dazzler in the Christmas Handicap at his last start. Warren Kennedy keeps the ride on the son of Black Minnaloushe, who also gts the cornell collar fitted. The Dazzler – moe to do (Pic- Candise Lenferna)

The Dazzler is back for more but is 2kgs worse off with Blackball and will need some luck on his side from the 14 draw.

Runner-up to Wealthy last year, Dark Moon Rising has it all to do on topweight after a 15 week break and some disappointing form. Noble Joshua is something of a course specialist and rattled off three wins on the trot in the middle of last year. He may still have needed his last run – his second after a rest – when fading behind News Stream.

Tommy Grand has lost form recently but did impress at this track in May last year when giving G G’s Dynasty 5,5 kgs and running him to a short head. A repeat of that brings him into the picture.

Legislate’s full-sister Statute is the only member of the fairer sex in the race and she will have her sentimental followers as she is trained by Michael Roberts. She was not far behind Born To Perform at her penultimate jump and has not been disgraced in mixed sex company.

Best of the rest could be Tristful  and Marchingontogether, both capable on their day.

The false rail is set at 7m.