Entries are due on Monday for the hotly debated reshuffled Gr3 Kenilworth Fillies Nursery and the Gr3 Of Good Hope Nursery and it’s possible, given that both Dean Kannemeyer and Dennis Drier don’t push their youngsters, that neither of Saturday’s smart winners – both Cape Premier Yearling Sale graduates – could turn up for the two features on Cape Derby day, 22 February. Kannemeyer opened the day with Var daughter Delta Queen, who was never headed, and just had too many pace guns for her hapless opponents.

Well supported in the betting, Delta Queen started 17-10 and beat the once raced French Fling by 3,50 lengths. No time was published.

A R2 million purchase for Lady Christine Laidlaw’s Khaya Stables, Delta Queen is out of Jet Master star River Jetez, a full-sister to Triple Horse Of The Year Pocket Power, whose victories included both the 2010 G1 J&B Met and Dubai’s Balanchine Stakes.

A thrilled Pippa Mickleburgh led the one-time ‘special good-looking yearling’ in with Kannemeyer in the absence overseas of Lady Laidlaw and said that she was looking forward to Delta Queen’s Silvano half-brother, who will be an attention grabber at the National Yearling Sale in April.

Barbara and Cedric Amm, in whose bright yellow flag she raced, own a share in River Jetez with Avontuur, and Pippa paid tribute to all involved with the wonderful mare. Beyond the Silvano yearling, River Jetez has a Silvano weanling filly at foot and is in foal to Drakenstein champion, Trippi.

Kannemeyer said that Delta Queen had shown promise and had been on the grass. “She is a lovely filly and I said she was a quartet prospect. It’s difficult to be too bullish with a first-timer. They can get stagefright. I wouldn’t be surprised to see her competing in one or two SA Champions Season features,” he said. 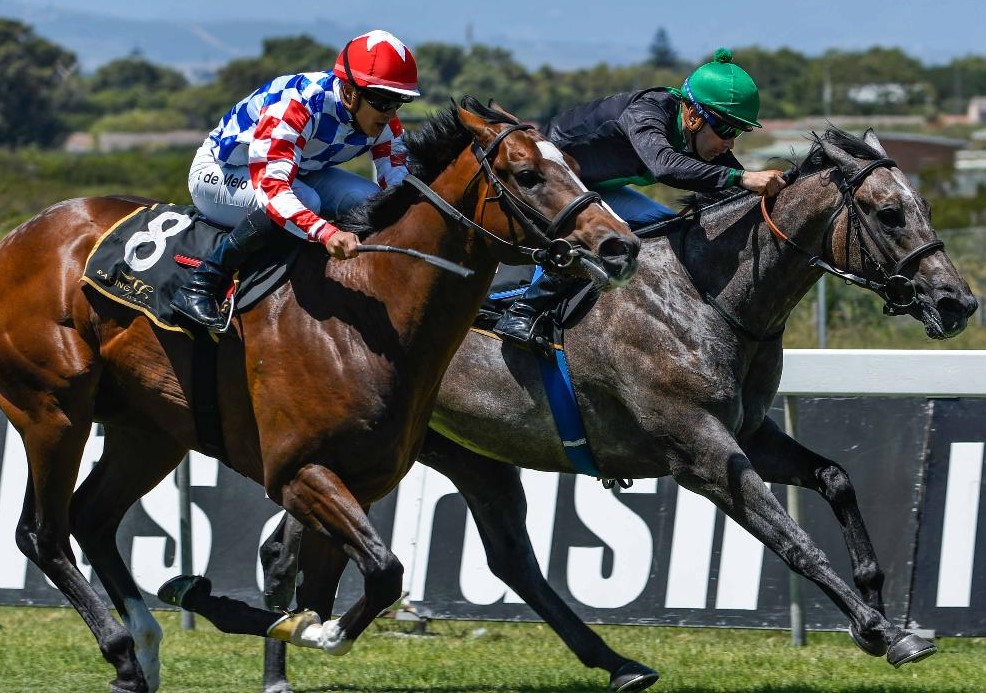 Drier trained both parents of the handsome R550 000 Cape Premier Yearling Sale graduate, who started at an easy-to-back 10 to 1 and beat the highly vaunted Purple Cloud  far easier than the 0,30 length margin suggests.

He was clearly expected to need the run and looks a nice sort.

Stamped with his Dad Master Of My Fate’s flashy good looks, Tempting Fate is out of the super quick Gr3 winning Var mare, Miss October, a full sister to Gr1 winner August Rush.

De Melo, who ended the day like he started it, when booting Pippielangkous home for Paul Reeves, shared the riding honours with Anton Marcus, who also rode a treble.

Both are in action at Hollywoodbets Greyville on Sunday where the Hollywoodbets Sizzling Summer Challenge is building to an interesting climax at month end.