The second leg of the SA Triple Crown, the Classic had an open look to it and the result delivered accordingly, with veteran Joey Soma making a welcome return to the Gr1 winner’s enclosure, courtesy of his 2yo Gr1 winner Got The Greenlight finding his best form under Bernard Fayd’herbe. After the emotion and excitement of Summer Pudding’s thrilling success earlier in the SA Fillies Classic, it was hard to imagine matching that joy.

But for Joey and co-owner Dayalan Chinsammy, it was a deserved opportunity to let go of some pent up emotion and frustration. And when you own and train a good horse, people tend to listen.

It seems like the connections couldn’t get to grips that as the only Gr1 winner in the line-up, their horse was mostly ‘ignored by the media’. 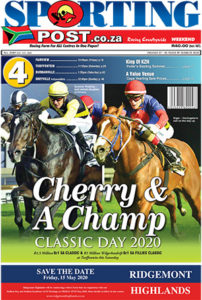 Our feature preview carried Got The Greenlight’s pic featured on page 3, he was suggested as an inclusion in our preview editorial and was tipped by our analyst, Mark McGillewie to win.

But that’s all sideshow stuff now as the 2019/20 classic generation threw another curved ball into the mix of a fascinating season.

With only two ordinary races under the belt as a 3yo, which included a seemingly ill-considered trip to Cape Town in pursuit of the CTS riches, Got The Greenlight came off an unorthodox prep but the long-striding colt seemed to appreciate the strong handling of Bernard Fayd’herbe and the extra ground for the first time.

His three major opponents also had questions marks against their names: Shango was withdrawn from the Guineas on veterinary grounds; Ikigai had stamina doubts; Frosted Gold tends to lack a killer punch.

And the stable hasn’t exactly been in form – this was only their third winner of the term, the previous a workrider’s race two weeks ago.

So hindsight being an exact science and picking apart the puzzle, Got The Greenlight was probably some genuine value at his price.

Moving up gradually down the inside rail from midfield and under a determined typically vigorous Bernard Fayd’herbe ride, Got The Greenlight (14-1) kept on determinedly to beat Green Laser (14-1) by 0,75 lengths in a time of 110,93 secs.

Youncanthurrylove (9-1) ran a neck back in third to round off a Gimmethegreenlight Gr1 trifecta. The second and third horses were bred by Varsfontein Stud. 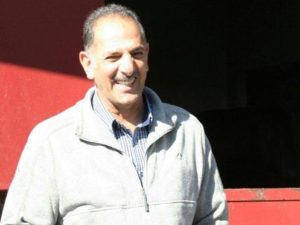 The Gauteng Guineas winner Ikigai (13-10) made a late appearance in the parade and had little to come late – running fifth and 2,85 lengths off the winner.

His stablemate Shango finished 3,85 lengths back.

The winner was purchased by the astute veteran Joey Soma for R110 000 off the 2018 CTS April Yearling Sale.

He took his earnings to R1 683 000 with his fifth win with four places from ten starts.

Got The Greenlight races in a partnership of Dayalan Chinsammy, Hassen Adams and Joey Soma.

Bred by Nadeson Park Stud, he was one of three graded stakes winners on the day for Varsfontein sire Gimmethegreenlight (More Than Ready) and is out of the one-time winner Command Chi (Commands).

Try Your Luck With A ‘Quaddie’