Horseracing’s plight hit the front page of The Mercury newspaper this morning in an article entitled ‘SA’s Horseracing Under Threat’.

It was written that the future of the entire thoroughbred horse racing industry in South Africa is on the line after the National Coronavirus Command Council (NCC) rejected the National Horseracing Authorities (NHA) submission to race behind closed doors.

The decision is expected to cost tens of thousands of jobs and the lives of hundreds of racehorses, who face euthanasia if the government does not permit racing to resume soon.

After reviewing the NHA’s submissions last week, racing was deemed not to be an essential service by the NCC.

This, despite assertions in the submission that racing is a low risk, non-contact event with high economic value, as the racing events are a critical element in the supply chain and a related agricultural service.

However, the NCC said racing could not be separated from gambling activities like casinos, and these operations were not included under the Level 4 regulations. 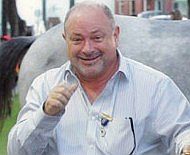 Michel Nairac, chief executive of Gold Circle, the company that runs horse racing in KwaZulu-Natal (KZN), said that there seemed to be a misunderstanding by the NCC as to the simplicity of what the NHA’s submission entailed.

“They appeared to confuse gambling with racing. They didn’t seem to understand that the same people that are looking after the horses in the training centres are the ones that will be on the racecourse.”

He said the NHA’s submission was comprehensive and stressed that the public would be barred from the racecourses, and that all public gambling facilities like the TAB and bookmaking outlets would remain closed. Only online betting would be allowed.

The JSE-listed company Phumelela Gaming and Leisure, the company which runs horse racing in all provinces except KwaZulu-Natal, was already under massive financial stress before the start of the national lockdown.

Last night, the company announced it was still in discussions aimed at raising capital.

If unsuccessful, it could be placed under business rescue or the board would have to consider an application for voluntary liquidation, it said.

A decision on whether or not to keep the company afloat was expected to be taken at a crucial board meeting last night.

Nairac cautioned that if Phumelela folded, it would have a catastrophic effect on thoroughbred horse racing.

Phumelela operates the national totalisator. It also controls the horse racing channel Tellytrack on DStv and the international arm of the sport with the sale of racing products to international betting markets.

With no racing in the Phumelela controlled regions – including Gauteng, the Western and Eastern Cape provinces and Free State – grooms will be retrenched.

There will also be dire consequences for the horses in all racing centres as the labour-intensive sport is being threatened not only financially but ethically.

With no racing, hundreds of thoroughbred racehorses face euthanasia, and every horse has a groom. Justin Snaith runs one of the biggest racing operations in the country, training 150 horses and employing 100 people.

He sees these numbers dropping unless racing resumes soon.

“The racing industry is going to take a knock, and if we carry on like this with no racing, there will be repercussions and long-term damage. We need to resume as soon as possible,” said Snaith.

“There’s a lot of pressure from owners wanting racing to resume – racehorses are extremely expensive. My owners have been understanding so far, but for how much longer? The pressure will rise and we can only go on for so long before we start having problems,” he added.

Asked if he would be able to keep all his staff, he answered: “It’s going to be hard,” and he described a sharp drop in the number of horses he trains as “inevitable”.

Snaith said that keeping racing suspended, even though it would be staged behind closed doors, did not tally with the success the industry had had in keeping Covid-19 at bay.

“So far as I know, no one in racing has contracted Covid-19. Racing is one of the few industries in which you can say that they have isolated and quarantined the entire operation.

“This is particularly the case at Summerveld in KZN, where there are over 700 people who have been employed, quarantined and fed during the entire lockdown period.”

Trainers are also under severe financial pressure and very few are able to carry the costs of keeping horses.

Euthanasia and staff retrenchments could be their options, said Snaith. “Horses have already been euthanised in numbers, and that is the sad reality,” he said.

He added that it would also be impossible for trainers to stay in business if racing did not resume.

“Some owners are already dumping horses on their trainers and remember, for every horse that gets euthanised, a groom loses his job. Also, for many trainers the biggest issue is that they are big owners in their own right, with shares in the horses they train.”

Bloomberg added that the industry remained free of the virus and that the 450 grooms tested at the Randjesfontein Training Centre in Gauteng last Saturday were negative.

A Busy Thursday On Track