Trainer Paul Peter produced the magic at Turffontein on Saturday when his unbeaten Silvano filly made it six from six and proudly became the third filly to don the SA Triple Tiara crown under an animated ride by Gavin Lerena, who picked up the ride in place of the travel restricted Warren Kennedy, who opted to stay at home.

Summer Pudding, who looked under serious pressure at a point near the top of the home straight, joined Mike de Kock’s Galileo flyer Igugu, who won the SA Tiara in 2011 and her relative, the Ormond Ferraris-trained Cherry On The Top in the same silks, who was the newsmaker in 2013. Summer Pudding, who was a first Gr1 winner for trainer Paul Peter when winning the SA Fillies Classic in March, produced a rousing finish, trying the 2450m for the first time, to score her fourth graded victory on the trot when grabbing the honours in the R150 000 Wilgerbosdrift Gr2 SA Oaks – and banking the R1 million bonus at the same time. 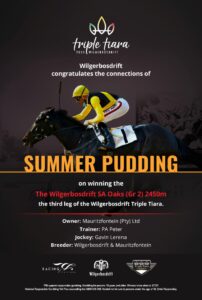 Under normal circumstances the three races comprising the SA Triple Tiara are over in around 60 days, but thanks to the lockdown, the 2020 version will go down as our longest in history. It was an outstanding training feat, whichever way we look it.

“She is a beautifully filly. She glides and couldn’t blow out a candle afterwards,” said an elated Gavin Lerena.

“This filly was Ferraris-fit today,” conceded the ever humble Paul Peter as he paid tribute to the filly’s retired trainer, Ormond Ferraris, and dedicated the win to his late brother.

After her stablemate Magic Milla had kept the pace honest throughout, Lerena got to work on Summer Pudding, who looked deceptively flat-footed as she built into her stride.

The 75-1 shot Ballet Shoes was a further half length back in third, with Marygold (117-20) , who looked dangerous late completing the quartet.

The Wilgerbosdrift & Mauritzfontein bred Summer Pudding was said to have missed the crowd and her trainer undertook to bring her back for an appearance when ‘things were back to normal’ – a lovely gesture. Jockey Luke Ferraris was unseated from Victoria Paige and news is awaited after he was seen limping off the track.

In a marginal improvement for TAB after a trying week on the exotic pool front, the Turffontein Saturday Pick 6 pool reached R 1 712 196 with the benefit of a R250 000 carryover kickstart.