The SA Horse Of The Year debate looks likely to go all the way down to the wire, with major contenders Hawwaam, Got The Greenlight, One World and, dare we suggest SA Triple Tiara winner Summer Pudding, all worthy challengers for the premier accolade. Sun Met winner One World was SA’s leading stakes earner, banking R 2 289 375 but retired straight after his Met victory. Will that early exit count against a fellow who beat Rainbow Bridge, Do It Again and Hawwaam?

Joey Soma’s youngster Got The Greenlight is second highest earner on R1 565 000, and ran a cracking second behind Belgarion in the Vodacom Durban July. Like Hawwaam, he won two Gr1’s in the season – but both against his own age group.

Hawwaam picked up two Gr1 trophies at his final two starts in Gauteng before his quarantine for export. He was apparently not himself in the Cape when beaten in the Queen’s Plate and Met. Should Olympic champions be allowed excuses – and can he only win Gr1’s when Do It Again, Rainbow Bridge and Vardy are not in town? He must be favourite, despite the disappointments, to emigrate on a high.

SA Triple Tiara queen and trainer Paul Peter’s first Gr1 winner, Summer Pudding ended her 3yo campaign undefeated in seven outings and a dual Gr1 winner. But she only ever faced her own sex and probably stumps herself on that score. Empress Club and Igugu were both fairer sex past SA Horses Of The Year, but the ‘galloping goldmine’ won both the boys and girls Guineas.

The first ever SA Triple Tiara winner, Igugu was nationally exposed, also travelling to the Cape, when placing behind Ebony Flyer in the Cape Fillies Guineas and winning the Gr1 Woolavington and the Vodacom Durban July of 2011.

The Racing Association’s Merle Parker told the Sporting Post on Wednesday morning that a meeting had been convened for 12 August where industry bodies would be discussing the format for Equus 2020.

So the all important acknowledgement of top achievers will proceed, albeit sans the black ties, acceptance speeches and glam of Emperors Palace. 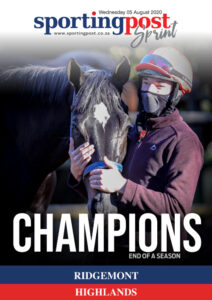 17 comments on “Who Will Be SA Horse Of The Year?”

Croisette Could Be Best Value Today

A Palace Of Dreams