Despite never having taken on the boys, the Wilgerbosdrift & Mauritzfontein-bred undefeated SA Triple Tiara winner of last term, Summer Pudding, was crowned SA Horse Of The Year at the unique virtual Equus Awards hosted by the Desch attired veteran broadcasters Neil Andrews and Nico Kritsiotis on Tellytrack on Sunday evening.

On a big evening for a dominant South African breeding dynasty, Mary Slack was acknowledged with a Lifetime Achievement Award, while Wilgerbosdrift and Mauritzfontein were voted outstanding SA Breeder. In an outcome that went largely according to expectations, Sporting Post readers were on the button in the Horse Of The Year debate, after voting 41% in favour of Summer Pudding, with Joey Soma’s Got The Greenlight (12%) and Hawwaam (11%) next best in the poll.

A winner of all of her seven starts, Summer Pudding earned R1 413 500, excluding her Tiara bonus, and proved the darling of the SA racing public in a testing season, with an heroic final effort when launching from what looked a beaten position to win the Gr1 Woolavington 2000 in dazzling style. She also, unsurprisingly, picked up the Champion 3yo Filly title. Her anticipated major threat for top honours, Joey Soma’s smashing 4yo Got The Greenlight, didn’t walk away unheralded and was crowned Champion 3yo  Male and Champion Middle Distance after an extended season where he won the Gr1 SA Classic, Gr1 Daily News 2000 and ran second to Belgarion in the Gr1 Vodacom Durban July. The Avontuur-bred Tempting Fate, the Gr1 Golden Horseshoe winning son of Master Of My Fate was crowned Champion 2yo Colt, while Var’s smashing daughter Anything Goes received the fairer sex equivalent.

Many may have felt that another of Master Of My Fate’s offspring in the Gr1 Premiers Champion Stakes winner Sentbydestiny, who beat the males in a thriller, may have swung the judges in her favour.

New Drakenstein stallion One World, who probably did his Horse Of The Year aspirations no favours by retiring after the Sun Met, clinched a hotly contested Champion Older Male category.

Klawervlei were crowned Champion Breeders, with their supremo John Koster generously dedicating the award to all of his fellow winners.

Well done to the organisers and all the nominees. A superb effort in trying times!

Here are all the winners- Russet Air (What A Winter) 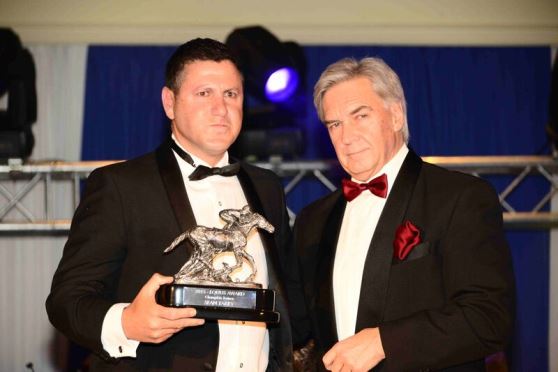 Horse of The Year

Special Award to the Groom of the Horse of the year

Congratulations to all the winners!