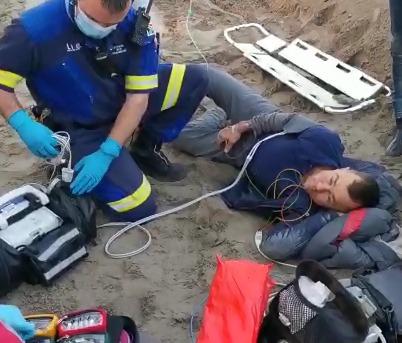 MJ is stabilised by a paramedic

While his timing is lethal on the racetrack, Sun Met winning jockey MJ Byleveld has not had the same good fortune when it comes to injuries.

He was hospitalised early on Tuesday morning after falling heavily during trackwork at the Vaughan Marshall yard at Milnerton.

The Avontuur-sponsored rider told the Sporting Post from his hospital bed that he had suffered a fracture of the tibia and his ankle after his mount tragically suffered a heart attack.

MJ was awaiting the specialist, but sounded in groggy good spirits as he chatted to us and said that he had no idea how long he will be off.

He is likely to undergo surgery on Wednesday morning.

The dynamic rider has had no luck over the past few years, usually on the eve of the Cape Summer Season. That’s poor timing as he is attached to a top-class yard!

In 2019 he suffered a neck injury that kept him out for many months.

“I’m devastated. I didn’t need this kind of news on the eve of the Cape Summer Season,” a visibly disappointed MJ Byleveld told the Sporting Post in September 2018 just prior to undergoing complex back surgery.

In August 2016 he had an operation to repair the right leg injury he suffered when he was kicked by Ready To Attack after the 2015 Langerman.

The aspect of the absence of medical care at trackwork has again been highlighted, with onlookers informing the Sporting Post that the injured jockey had to wait ‘forever’ and as long as forty minutes for medical help. The racing industry surely owes our workriders better.

Jaap Visser To Train From Milnerton