The first in a series of Webinars, organised by the Asian Racing Federation (ARF), examining the unprecedented challenges and opportunities faced by the racing industry during the global COVID-19 pandemic, was hosted on 14 September by ARF Chairman, Mr Winfried Engelbrecht-Bresges, before an online audience from around the world. Together they shared their experiences in this webinar titled Navigating the New Normal. The webinar was facilitated by BBC Chief Presenter David Eades and focused on risk mitigation and capitalising on opportunities through the extraordinary global circumstances in 2020.

Mr Engelbrecht-Bresges opened the session with a presentation which explored the overall impact of the Covid-19 pandemic on the industry, and the active role of the ARF.

The presentations from the leaders centred on the following recurring themes – productive engagement with government; management of public health risk; maintenance of employment; the importance of online wagering; commitment to community and the entertainment value of racing which allowed it to capitalise on often being the “only game in town”.

Engelbrecht-Bresges described the 2019/20 season in Hong Kong “one of the most challenging seasons in history”. “Despite the adversity, we have been able to continue racing without losing one single meeting; and had zero infections in relation to jockeys, trainers, stable staff and racing officials. Our year-on-year total racing turnover has declined only by 2.57% when many other industries came almost to a standstill,” Engelbrecht-Bresges said.

The Hong Kong Jockey Club CEO said that racing’s remarkable agility and resilience had been vital in maintaining many economic and social benefits including tax payments and charity donations – which Japan has mirrored – at a time when greatly needed and also maintained employment of over 21,000 full time and part time staff at the Jockey Club. Temperature checks, surgical masks, health declaration forms, stringent social distancing measures and regular testing of jockeys all became mandatory, to support a protective “racing bubble” as Engelbrecht-Bresges called it.  That “bubble” remains in place in the new season which commenced on 6 September with a record high turnover of HK$1.376 billion, an increase of 6.8% compared to last season (and included an 18% increase in commingling turnover).

Engelbrecht-Bresges applauded the efforts of Hong Kong’s racing participants, stating that all of this was made possible because “we had the buy-in of everybody that they had to restrict even their social movement. Every industry participant, everyone in the stables knew that we needed that because if we had one positive case we would have been shut down”.

Engelbrecht-Bresges said he remained “cautiously optimistic” about the new season and hopeful that December’s Longines Hong Kong International Races and International Jockey Championships would be staged to the best of the Club’s abilities as it continues to work with government officials and overseas connections.

Racing Australia Chairman, Greg Nichols, outlined the approach in Australia which centred on liaising with the Federal Government to ensure the three key objectives of keeping racing going; maintaining employment for the majority of Australian racing’s 74,000 plus full-time participants; and ensuring that equine welfare retained its prominence.

Australia and Japan, unlike Hong Kong, also have had to deal with a thoroughbred breeding industry.  Nichols said that Racing Australia’s focus was now on the economic impact “once we come out the other side” on the Australian racing and breeding industries.

Nichols noted that pre-Covid-19 levels of prizemoney were reinstated in all PRAs no later than 1 August 2020 after a circa 20% reduction in some areas and that a total of 26 black-type events were lost as a consequence of the pandemic.

“An immediate impact, in Australia, was the move to racing behind closed doors,’ Nichols said.  “This has eased in some states but unfortunately, Victorian racing, and to a less restricted degree, Tasmania, continue to race behind closed doors. The likelihood is that the Melbourne Cup Carnival will play out in a crowd free environment, whereas The Everest racing carnival in Sydney will capitalise upon a capacity to host crowds at race meetings.”

On the plus side, Nichols said: “Thoroughbred racing during the early days of the pandemic was “the only game in town” in terms of a sporting betting contingency. While other sports have resumed to some degree, racing continues to exploit the advantage generated by our ability to continue from the onset of Covid-19 and there’s been a general windfall in revenue derived from wagering which continues.

“The positive message I wish to impart is one of increasing confidence that the ingenuity and resilience of thoroughbred racing as exemplified by our sport during these troubled times will ensure racing enters 2021 with renewed hope and ambition.” Japan’s Masayuki Goto addressed the Webinar via video link. He made special mention “that under the Covid-19 pandemic the JRA has had no confirmed cases among jockeys, trainers and stable staff. A high level of awareness and tireless efforts to safeguard against coronavirus is the biggest reason why we have maintained racing without suspension.

“We have kept racing going without spectators since February. We requested owners and racing media to take all the necessary measures and the movement of horses and jockeys was restricted,” he said.

While off course being facilities were closed from the end of February until last weekend (and earlier in some regional areas), the JRA President and CEO said online wagering, already popular in Japan, had been vital as has also been the case in Australia and Hong Kong.

“Online wagering accounted for more than 70% of total turnover before Covid-19 and the number of online customers has increased as horse racing became one of the few leisure activities which could be enjoyed a home. Turnover between January and August has been almost the same as last year. It was necessary to have the online betting structures in place and to provide race footage free of charge to TV and the internet.”

Goto said it was critical to keep the cycle of racing secure and functioning – from breeding, breaking and training to racing. Maintaining fan engagement was also important and this had been achieved, for example, through inviting fans to post online messages which were published on Japanese Derby Day. 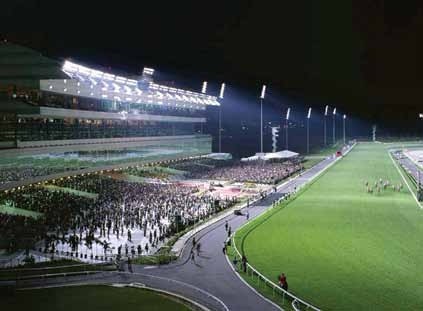 Singapore’s Alan Ow echoed the thoughts of all as he outlined the importance of government engagement, safety assurances, segregation for health protection and the acceleration of technology in the bid to reduce reliance on “bricks and mortar” betting centres as the Turf Club fought for racing’s resumption.

Ow said: “Our racing was suspended for three months and we were faced with numerous difficulties headed by providing government with assurance that all safety management measures were in place and our turnover has been restricted by no crowds. Remote betting is less than 20% of our annual turnover and we need to reduce our reliance on the traditional betting centres”.

“We are working on the progressive opening of the racecourse to the public but there is no time line as yet.”

Engelbrecht-Bresges, in closing, said that while online betting had grown significantly, he was confident that people’s desire for “social connection” would encourage most to return to the track as restrictions ease.

Two further ARF Webinars are planned for 2020 with the next, titled Enhancing Wagering Outcomes and Addressing the Rising Threat of Illegal Wagering, scheduled for 19 October.