New owner MK ‘Koos’ Nkale struck gold with the first horse he has ever owned when MK’s Pride got his nose in front in a thriller of a finish to the Bloodstock South Africa R900 000 Peermont Emperors Palace Ready To Run Cup at Turffontein on Saturday.

The 1400m contest, offering the biggest single stake of the 2020/21 season so far, was restricted to eligible graduates of the 2019 Emperor’s Palace Summer Ready To Run Sales.

And while the late withdrawal on Thursday of champion filly Anything Goes looked to have thrown the race wide open, the support still came for another crack fairer sex galloper in the shape of Paul Matchett’s Gr1 performer, War Of Athena.

The three way tussle over the final 100m, between eventual winner MK’s Pride (5-2), narrowly beaten favourite War Of Athena (15-10) and the Sean Tarry-trained longshot maiden Flying Carpet (40-1), produced the finish of the day – and a shining advert for the thrills of racehorse ownership for the BSA team ahead of their big sale in November. 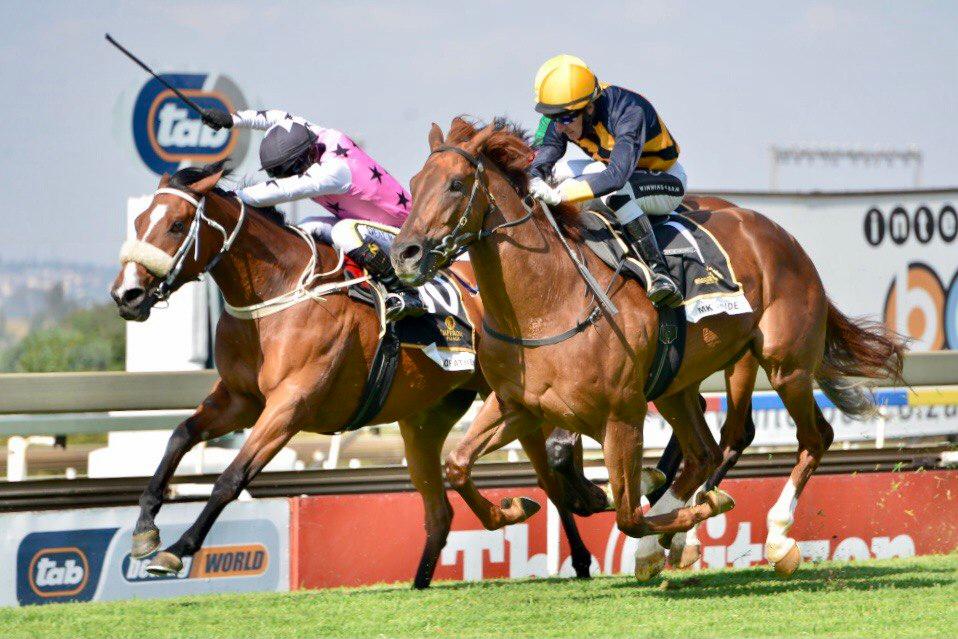 Winning Form’s SA Champion jockey Warren Kennedy produced a perfectly timed ride to get MK’s Pride up by a short head in 84,37 secs – a time faster than that recorded under the same weight by the impressive Malmoos in the Gr3 Graham Beck Stakes and Due Dilgence (a filly carrying 58kgs) in the Gr3 Starling Stakes.

A visibly relieved Kennedy was full of praise for the winner, saying that when his mount had put his head in front, the young colt thought he had done enough.

“When the filly rallied, I thought MK’s Pride had been beaten when not putting it all in. He is a really smart horse!”

Trainer Paul Peter said he was thrilled that the fairytale had unfolded for the Nkale family.

“When I spoke to Koos before the race, he said what will be will be. So no pressure – even from a brand new owner. He has been in racing for thirty years so understands the game. He has a beautiful laid-back horse. We will go next for the Dingaans. MK’s Pride will enjoy the mile. We will only see the best from this chap later on,” an elated Peter told the Sporting Post.

In an emotional – and lengthy – post race interview, Mr Nkale, who selected and bought the winner himself for R100 000, indicated that he was a spiritual man, who was thrilled for his family, the Peter team, and even for South Africa.

“When I saw Summer Pudding win, I decided Mr Paul Peter was my trainer. This is a wonderful day for racing and for South Africa – we prayed and I thank the Almighty,” he said.

In a further chapter of a genuine fairytale of a story, MK’s Pride races in the black and gold of soccer side, Kaizer Chiefs. Mr Nkale is one of the most passionate of the top team’s 16 million supporters.

Cheques were paid all the way down to R10 800 for tenth finish to Somasonic.

Bred by Summerhill, the winner is a son of Willow Magic (Dubawi) out of the modest one-time winning Admire Main mare, Ikimasu.

What a great moment for racing in these crazy times!

No Retirement Yet For Denman