Justin Snaith saddled only the second 3yo winner of the R1 million Gr1 L’Ormarins Queen’s Plate this century when the Drakenstein-bred Trippi colt Jet Dark bounded home in a KZN partnership of Nic Jonsson and Tommy Crowe to win South Africa’s premier weight-for-age mile at Kenilworth on Saturday.

Snaith, who coincidentally also saddled the previous 3yo to win the big one in present day Varsfontein sire Gimmethegreenlight in 2012, came to the LQP party with all guns loaded.

And besides his two anchor seniors in Do It Again and Belgarion, included optimistic entry pacesetter Hurricane Harry, and the Cape Guineas low-flying fourth-placer, Jet Dark. And in an unlikely result, Jet Dark (12-1) became Justin Snaith’s third L’Ormarins Queen’s Plate winner, when he came forward strongly down the inside rail under the ever alert Drakenstein-sponsored Grant van Niekerk to beat the powerful galloping and luckless Rainbow Bridge (7-2), who built on two past thirds in the blue ‘n white mile, to gain a meritorious second place, and show that he is well on track for the Cape Met in three weeks’ time.

Receiving 5kgs for weight-for-age, Jet Dark beat Rainbow Bridge by 0,75 lengths in a time of 98,38 secs.

The Snaith tactical plan worked a dream on Saturday, as the Cape Champion outfit filled the first, third and fourth spot, and with Hurricane Harry doing the donkey work and ensuring a reasonable pace.

Backed into 9-10, recent WSB Green Point Stakes winner Belgarion was a bit flat-footed late, and ran into a 1,25 length third. The extra 400m of the Cape Met will be right up his alley.

Past winner Do It Again is still battling to regain his past fire, and ran a further 1,25 lengths back into fourth.

Sean Tarry’s consistent and game entire Cirillo was given every chance by Gavin Lerena, but had nothing to come and had to be content with a 3,25 length fifth.

In an interesting observation, Mike de Kock, who saddled 3yo Soqrat as runner-up behind Do It Again in 2019, said that overseas ‘they are queuing up to take on the older horses with their 3yo’s at weight-for-age.’

It’s easy to be wise after the event, but Justin Snaith’s move to include the 3yo is obviously to be lauded. 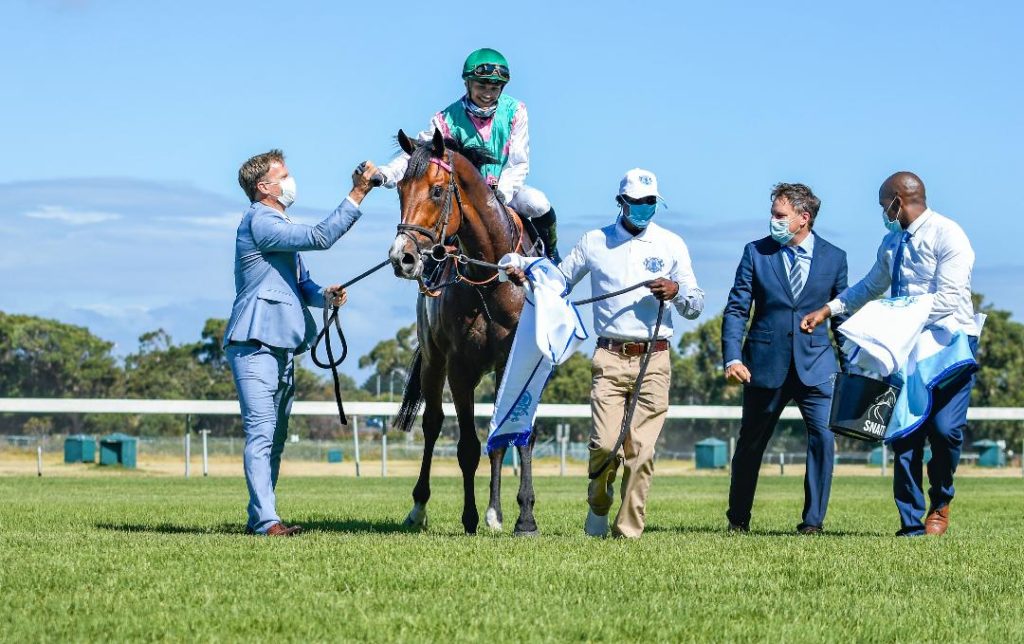 Looking ahead, Snaith described Jet Dark as a ‘Cape Town type who is immature and needs to be looked after’. That suggests that Jet Dark won’t be on the Snaith 2021 SA Champions Season bus to the East Coast.

A 200 000 buy from the 2019 Emperors Palace National Yearling Sale, Jet Dark was the 77th stakes winner sired by Drakenstein Stud’s resident sire Trippi when he won the Langerman last term. Justin reaffirmed after the race on Saturday that he still couldn’t work out how they bought the colt for that price.

33 comments on “Snaith Leaves Them In The Dark”

The Hosts With The Most

Sunday – From Sha Tin To Ngong