For previously disadvantaged jockey Robert Khathi, a lifetime ambition to ride in the Vodacom Durban July lies in tatters after a failure by National Horseracing Authority management to exercise a measure of flexibility and discretion this past week.

Cape-based jockey Robert Khathi, a father of four, had the rug literally pulled from under his feet by the National Horseracing Authority on Thursday when blocked from taking six rides for the Kenilworth racemeeting on 23 June.

And he now also misses out on a possible engagement for the powerful Snaith Racing Team in their quest to win the Vodacom Durban July for the fourth consecutive year.

An emotional Simukeliswa ‘Robert’ Khathi, who was plucked from the relative obscurity of Umlazi High School in KZN at the tender age of 16 to join the SA Jockey Academy,  told the Sporting Post on Thursday evening that he was stunned when blocked from rides he had already accepted. He had not been given prior warning that the NHRA had decided to implement a month’s suspension and said that he was both professionally embarrassed, as he had effectively let trainers and owners down, and was worried about the financial predicament as he had been given no chance to budget or plan.

“I accepted the six rides for Wednesday in the normal course of my professional commitments as nobody had contacted me to inform me that my suspension would be implemented. Mr Robert Bloomberg has been assisting me and he was communicating with the National Horseracing Authority as regards a possible appeal and the matter being confirmed by the inquiry review board. It’s a competitive game and letting people down is not the way to go about getting  the support from trainers to ensure that we can put food on the table,” said a devastated Khathi.

The Sporting Post has learnt that  as an implementation of his suspension, Khathi’s mounts for Kenilworth on Wednesday 23 June were scratched for reason of his non availability.

This system block was implemented by the racing regulator’s Gauteng management, despite them being aware that no time or financial resources were available for the jockey to lodge an appeal or a civil action.

We recently reported that first-offender Khathi had incurred a seemingly harsh punishment of a month suspension for his ride on Fateful on the gelding’s return after a 138 day break, at Kenilworth on 3 May.

Khathi was legally represented at the subsequent inquiry. He pleaded not guilty to the charge, but was found guilty.

The Inquiry Board, after considering all the factors tendered in mitigation and aggravation, imposed a penalty of a suspension in riding in races for a period of thirty days.

Khathi was given the Right of Appeal against the finding and the penalty imposed.

The Sporting Post has learnt that at the completion of the Inquiry, it was agreed by the chairman of the Inquiry Board, Nic Shearer, and presenter, Ernie Rodrigues, that this matter would go to the Inquiry Review Board to consider the severity of the penalty imposed as the family man did not have the financial resources at his disposal to appeal.

Messrs Rodriques and Shearer  were also aware that Khathi had a potential July ride lined up, and in sympathetic consideration thereof, did not want him to lose out as after 20 years of riding he finally had an opportunity of realising every jockey’s dream of a ride in Africa’s greatest race.

Rodriques and Shearer must be acknowledged for exercising professional discretion and for their sensitivity to this issue.

“I was shocked by the month suspension but accepted the process would walk its course. I appreciate that the Stipes are doing their job and I respect the findings. But the decision to spring the suspension on me puzzled Mr Bloomberg and has left me stunned,” added the hardworking jockey. 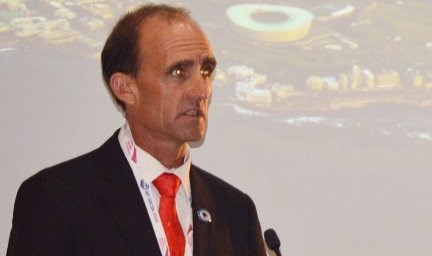 Khathi’s legal counsel  was advised that NHRA Racing Executive Arnold Hyde had ‘handcuffed’ the Western Cape Stipendiary Board and had issued instructions that the Inquiry Review Board would not review the matter and that Khathi’s Notice of Intention to Appeal must be lodged – that being on the last of the 7 days allowed.

Counsel for Khathi had requested an extension in which to raise the necessary appeal deposit of R8 950.

Khathi is married and has four young children. The request for a compassionate extension was denied by the NHRA Racing Executive and thus the appeal had accordingly expired.

South Africa’s leading horseracing attorney, Bloomberg then advised NHRA CEO Vee Moodley that Rule 85.20 explicitly stated that where an appeal had lapsed ‘no penalty shall be effective until the Inquiry Review Board has confirmed it.’ This also fell in line with the terms of the Western Cape Board’s original ruling. According to Bloomberg, Mr Moodley responded citing rule 86.1.1.4 which he says contradicts Rule 85.20 – all a matter of interpretation in the vastly experienced legal counsel’s opinion – and confirmed the suspension.

Bloomberg told the Sporting Post that both the CEO and Racing Executive were aware that on Monday 21 June, the day after the suspension became effective, final declarations for the Vodacom Durban July are due.

“Moodley and Hyde have collectively denied a previously disadvantaged black jockey the possible opportunity of riding in the country’s greatest showpiece. Could they not have waited an extra day?” said a clearly emotional Bloomberg.

Bloomberg added that the NHRA management will likely defend their actions and endeavour to hide behind their so-called rules and allege fairness to all.

But for the reasons already stated he said that stakeholders and the racing public can draw their own conclusions and decide whether the racing industry is ‘in safe and capable hands’.

“I have openly stated that horseracing in South Africa will only survive for as long as MOD keeps pouring money down a bottomless pit – but even that has an end game. From my perspective, as long as certain individuals remain in control at the domain they call the NHRA, I give racing three years before the doors are shut.”

The Sporting Post has given the NHRA an opportunity to respond. This will be published when received.