With an emotional victory aboard Champagne Haze on 17 February, Lyle Hewitson is just 3 winners off breaking Gavin Lerena’s record of 283 wins.

With 10 months to go until he signs his papers, it’s anyone’s guess what his final apprentice tally will be, but it’s a good bet it will stand for some time to come. 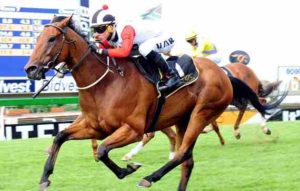 “Mr Alexander has always been a supporter and phoned me straightaway at 10:02 to ride the horse. Obviously I snapped it up and confirmed straightaway, so it’s thanks to him for phoning me and I’m grateful I was his choice. When I worked the horse that Wednesday, he put up really phenomenal work. There were concerns about the 1000m being a bit sharp, but he’s obviously a top horse and just needed to show a return to form. What he showed at work was that he was feeling as good as ever and he brought that to the course.”

“I was pretty happy to be drawn right on the outside. He broke really well and came out running. I didn’t ease him back at any stage and just let him relax into the bridle. As Greasepaint and Sporting Monarch came through, I caught a lead and let him find his momentum and slot in behind Sporting Monarch. He started to drop back a little through the 700/800m mark and it looked like I was out of my ground, but I could feel he was still getting into his action and couldn’t press to get closer at that stage. At the 500m he was building up nicely and when I gave him a slap down the shoulder, he pulled himself together and his whole demeanor changed. I got after him and he dropped a gear and quickened so well. Going through the 300, I knew Greasepaint wasn’t going to quicken again. We were making up so much ground, I folded away my stick and we won going away.”

“We went into the race just hoping for a nice run and the fact that he won, made it more enjoyable. All the owners were there I gave them the confidence that we could expect a big run and it’s just nice when a plan comes together. For them it was an emotional win, for me, it was my first winner in Mr Wernars’ colours, so it was an important win for my career as well. The fact that he won so impressively just added an x-factor to the whole celebration. He’s a special horse.” 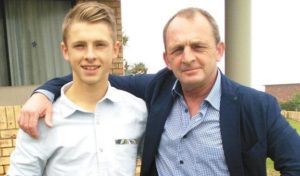 Lyle with his father, Carl

Lyle started work riding at Yvette Bremner’s yard under the watchful eye of his dad, former jockey Carl Hewitson. “He taught me to ride racehorses. The first time I ever did pace work upsides, I was 11 years old and I nearly put him over the bank! He had all the attributes to be a great rider which he’s passed on to me and touched up where he might have gone wrong. He’s not just a great rider, he’s a horseman as well and I’ve learnt a lot. He’s my number 1 supporter, but I’m truly grateful to be his number one student.”

When his mother asked him to finish his schooling, rather than joining the Jockey Academy in Grade 10, Lyle obliged, but found a compromise by becoming a licensed work rider.

Hard Work Puts You Where Luck Can Find You

Commenting that he has been lucky to get good support Lyle responds, “I prefer the word fortunate. Although you can put in the hard work, you still have to be recognised and given opportunities to succeed. As a work rider, one day I thought let’s take a chance and phone Mr Tarry. We’d never met, but I sent a message and never got a reply. The next week I tried again and he put me on a horse. It had no form from its last three runs, but he’d taken the leap of faith and given me the ride and I thought ‘fantastic, another ride in Joburg.’ The instructions were to drop the horse out, sit as long as I can and make a nice run through from the 300. I went and rode exactly how he asked, didn’t over complicate things and the horse finished 4th. Mr Tarry said afterwards, ‘Not many people can listen and execute like you did, whenever you need a ride, you can phone me.’ From there I rode for Mr Tarry and got opportunities for Mr Azzie and it boomed from there, I guess.”

Lyle finished top of the Work Rider table in 2014 and juggled riding with his matric studies in 2015, to win that year’s work rider challenge and finish 3rd on the Work Rider log.

Finally, it was off to the Academy in January 2016. Was there any awkwardness joining the Academy out of the work rider ranks? “Probably a little, but I kind of went in expecting that. I just took a humble approach and looked to help everyone where I could. I wasn’t looking for anything in return, but when Jason Gates had his first winner last year, he mentioned me in the interview to thank me for my help and said I’d been an inspiration. It’s so kind, you don’t expect things like that, but it shows if you’re a good person and want to help people, it doesn’t go unnoticed. And that was inspiring to me too.”

“The work riders were all really supportive when I joined the Academy and it’s nice to still see them all. Chamu Mabaya will always say ‘hello, my champion’ and come and chat when we see each other. I think it’s a kind of proof that ‘hey, we aren’t bad, we competed against you and look where you are now.’ It inspires me, and inspires them too and gives them the confidence to think ‘we’ve ridden against the likes of him, people shouldn’t look down on us’ and gives them a sense of importance as well.” 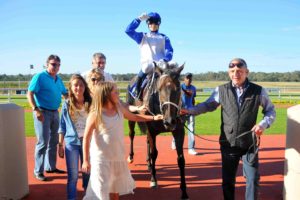 With two years of race riding under his belt, Lyle flew through the Academy preliminaries and had his first apprentice ride at Scottsville on 6 March 2016. His first winner came on his third book of rides at Fairview on 18 March 2016 aboard the filly Blizzard Belle. “It was in my dad’s silks, trained by Yvette Bremner, who I started riding with when I was 11, in my home town – it was like a fairy tale. Yvette is basically a second mother to me and I always said ‘imagine one day I’ll ride a horse for you – now I’m the stable jockey for them and we’ve had such a good season together!”

Lyle ticked off his first ‘major’ with a ride on Dynamic in the 2016 Vodacom Durban July and has been a fixture on Gr1 days ever since. He also picked up a sponsorship from Avontuur in November 2016. What have been his high and lowlights so far?

“That’s a tough one. I can’t say there’s been one moment, or highlight or a particular day. I never went out chasing goals, but I have realised all of them. I’d say there hasn’t been one huge moment, more lots of little moments.”

“I have been fortunate to get continued support, and I achieved a lot more than I could have expected in such a short time, but for me what was great was once my claims went, I didn’t stop winning and I probably did better once I stopped claiming.”

Lyle chased Callan Murray to the Champion Apprentice wire in 2016, won it by a landslide in 2017 and is on track to repeat his feat for 2018.

Did he envision any of this when he started out? “Obviously when you become an apprentice, your main goal is wanting to be champion. I did not put myself under pressure to ride any particular winner, but I always wanted to tick that box. In my first season, I’d only been riding 4 months and I came incredibly close. That gave me a lot of confidence for the next season to just go out and ride and having that positive mindset made achieving the goal a lot easier.”

On The Shoulders Of Giants 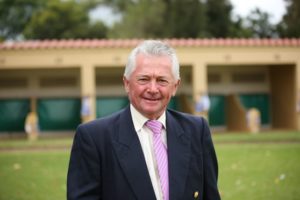 With a win tally of 281, he is just 3 wins away from breaking Gavin Lerena’s benchmark of 283, set back in 2007 when he smashed the great Michael Roberts’ record of 260 which had stood for over 30 years. Is there any additional pressure as the number approaches? “I haven’t really thought about it and have just been going about things as usual, so I wouldn’t say I’ve felt any pressure. When I get to races and have got one more left, maybe there will be a little more tension build up.”

What drives him? “I can’t really say. Just having such an unbelievable passion for racing and horses in general – I think that’s the biggest part of all of it. My upbringing, good family and having good support behind me. I went to a great school and I learnt a lot along the way, combined with a passion for the sport and a passion to succeed – that was probably the driving force behind everything. And I believed in myself. There’s a saying that goes if you do something you love, you never work a day in your life. I really believe it. Travelling in Gr10 and Gr11 for one ride – if you’ve got that dedication as an apprentice and as a jockey, you’re staring success in the eye. Hard work never killed anyone and putting in the hard yards has paid dividends.”

“I think it’s the low lights that have taught me the most and made me who I am. Where I make mistakes, I’m quite hard on myself, but acknowledging mistakes is the only way I can work on them. The next time you think ‘I felt so terrible because I didn’t do that, I must make sure I don’t make the same mistake.’ It helps make you more polished. Success makes you feel good, but learning from your mistakes is what makes you good.”