Although Alistair Cohen called Abashiri as the horses crossed the line in the SA Derby, the rest of the world wasn’t quite so sure and even the jockeys thought it might have gone the other way. The final result reflected that 0.2 of a length is the margin Abashiri clawed onto for Triple Crown glory. Fighting him tooth and nail to the line was Gavin van Zyl runner, Rocketball and the jockey who so nearly caused the upset of the Highveld season was Warren Kennedy.

Thirty-six year old Warren Brian Kennedy describes himself as a Durban boy born and bred. A son of the late Terrance Kennedy, Warren was not the first to follow in his father’s footsteps. “My father used to be a jockey, but gave up because of his weight. I don’t remember him riding, but he was always very supportive of my career. My brother actually applied to the Academy before me, but they rejected him and asked him to wait a year and apply again. It was his Std 8 year and he had to make his matric subject choices and in the end he decided not to be a jockey and is now a chartered accountant.” Warren at the Academy

“I was small at school and a lot of teachers suggested becoming a jockey. I was always the sporty one, so it was a natural progression.” Although he didn’t grow up around horses, Warren says being a jockey was something he was always determined to do. “The year before I joined the Academy I used to go to a little riding school in Yellowwood Park and trot around just to get used to it. Then I applied, got accepted and it went from there. I joined in 1995 and qualified in 2000. We were 13 apprentices in my year, but there aren’t too many of my intake left that are still riding. I joined with the likes of Nicky Roebuck, the late Gift Funeka and Morne Winnaar.”

“I ended up signing my papers quite late because I weighed too little, believe it or not. I was 28kgs in my second year. The Academy gave me an ultimatum – they were just opening the Academy in PE and said I could either go there or they’d cancel my indentures. So I went to PE – Sean Parker was running the PE Academy back then – and I joined Nic Claassen’s yard.” 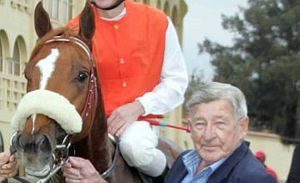 “Nic Claassen was hard, but a fair man – one of the old school trainers – and he taught me very good work ethic. I worked mornings and afternoons in the stables with him 7 days a week. I actually ended up boarding with him and staying with him for the final 2 years of my apprenticeship. Being in the stables in the afternoons taught me a lot about stable management and the horse itself. It taught me about being a horseman. The other thing he taught me was pace. He allowed me to do my thing in a race and most of the time, I drop my horses out. He taught me a lot about pace.”

Fittingly, Warren’s first win came for Nic Claassen. “My first win was in the Lady’s Pendant Stakes on Coded Missile at Fairview. It was actually a funny story – his usual jockey fell ill and got off his rides, so Mr Claassen put me on Coded Missile. It was a level weight feature, so there was no apprentice allowance and I won without any claim and beat Mark Khan in the finish.”

He is still pretty proud of that first one, but says “For me, every winner is enjoyable – there’s not really one win that sticks out more than the next – every winner that you can ride is a great experience for the owners and the trainer –

just to win a race for the guys that are involved and get them happy about their horses and the game is what drives me.”

“Within a few months, I became Claassen’s stable jockey and I rode many winners for him and the other trainers down there.” Most notably, Warren won the National Apprentice title in his final year, even though PE was only racing once a week at the time – an achievement he is justifiably proud of.

The life of a jockey is notoriously hard – on the body as well as the nerves – but after 16 years in the saddle, Warren seems to have found his stride with his second in the Derby catching the eye of more than just the Stipes. “It’s taken me a long time and I’d probably have preferred it to happen a little sooner, but I’m happy with where I am now and what the future looks like.”

“It’s hard to get recognised,” he says frankly. “There are a lot of good riders around that don’t get opportunities. You see guys with 2 or 3 rides a meeting and they’re good riders, but just don’t get the chances. They get disheartened and get their backs up and that doesn’t help.” What keeps him motivated? “It’s basically the old adage, the wheel turns. Things are bound to come right eventually.

You’ve just got to keep a positive attitude and persevere – everyone gets their turn in racing.”

Warren has had his fair share of ups and downs and perhaps one of the most horrifying of injuries along the way. “I’ve had a few breaks – collar bones, wrists, ribs, that sort of thing. And I had a serious head injury in PE in 2008. A horse slipped in front of me, my horse fell over it and the rest of the field ran over me. I broke more or less every bone in my face. It took 3 surgeries and they had to cut me from ear to ear and rebuild my face,” he relates cheerfully. “The healing process took 4 months, but luckily it didn’t affect my confidence or my nerves in any way and I was happy to get straight back in.”

The “getting back in” entailed his successful association with the Gavin Smith yard, a relationship that still continues. “I’m based in Durban now, which means it’s hard to get to PE on a Friday because of night racing in Durban, but I travel a lot and ride in PE on a Monday.”

Loyal and long-standing relationships are something of a hallmark of Warren’s career and he concurs: “I’m very loyal to a trainer once they give me an opportunity.

I’m the quintessential stable jockey – I ride the bad with the good, no matter what.”

Apart from his successful stint in PE, he has ridden for the likes of Geoff Woodruff and Mike de Kock and has ridden all over the country. His present association with the Gavin van Zyl yard came about more by accident than design. He explains, “I was actually riding a lot for Kom Naidoo at the time and decided I wanted to spread myself out a bit. I went and took a couple of horses for the Van Zyl’s and Gavin gave me some opportunities. I won a few for them and they appreciated my feedback, so we just fell into each other’s laps. It’s been great, I get along with Gavin and Gareth and we work very well together. The communication is great and we all know exactly what to do and where to go with each horse.”

“Some jockeys are lucky and fall into stables and get good horses immediately. With us it’s been a building partnership. We’ve restructured the stable and we’ve got some new horses coming in. I think by the end of this season and the beginning of next season, we should be firing.”

“Every stable strives to have good horses, but the Group 1’s are where you get noticed and we’re all working very hard to get there. Gavin is very involved with his owners and the stable and having his sons working for him, the support structure is huge. You can see how he operates, trying to fill the stable and be as strong as he can. We all just knuckle down and do our thing and it is great to see that starting to come to fruition. We’re hoping Rocketball can prove us and hope his Derby run wasn’t just a fluke.” Rocketball chases Abashiri to the line

“We went into the Derby with the idea of not thinking about beating Abashiri, but getting the trip as best we can. Rocketball is a very strong individual. We were confident he was going to see the trip, but the trick was to get him to settle as he can overdo it in a race. Fortunately the pace was on and he settled beautifully. The race went well for me – I had Abashiri on my inside in the home straight and my horse travelled really well throughout. When I asked, he quickened beautifully. About 500m out, Abashiri hit the front and he was obviously the class horse and the one to beat. I thought running second to him would not be a bad thing and tried to keep my place. Four hundred out nothing was changing. Three hundred metres out, Rocketball started to find another gear. A hundred and fifty metres out I could see Abashiri starting to flounder, but we just couldn’t get there in time. It was unfortunate, but take nothing away from Abashiri,” he adds sincerely, “he ran a great race.”

Fluke or not, Rocketball has drawn 1 for Saturday’s Daily News 2000. “We’re expecting a big run and hoping for a top three finish and from there on to the July.”