Saturday racing is like Christmas in Kimberley. It comes but once a year.

Multiple Northern Cape Champion trainer Corrie Lensley has a host of runners on the big day and he and his team are looking forward to being very competitive.

There is something genuine and unaffected about Kimberley folk. Talking to Corrie, and his wife and assistant – and also a qualified community nurse – Emmie La Grange, one gets the straight facts without the frills.

It’s a Platteland naivete that is refreshing in our racing world of ‘I didn’t tell you and please don’t quote me’s!’

Lensley has been one of the stalwarts of Flamingo Park for over a decade – in fact he goes back to the days when he was a ‘battler’ and Muzi Yeni was still a 4kg claimer.

“We are proud of what our man Muzi has achieved this season. He has come a long way and even though it was a bit of love and hate early on with us, our relationship has grown. We have used other jockeys as he has opted for better rides at times – it’s a give and take. Something we understand,”says Corrie, as he grimaces with knee pain.

His most recent big winner came courtesy of Suzette and Basie Viljoen’s smart filly Ruby And Roses in the Kimberley Nursery under Calvin Habib on Monday 22 July. Emmie says Corrie is a master with young horses – but doesn’t push them hard. “Patience is key. We like to let our horses find their own level and develop. Rushing 2yo’s can be a short-term approach,” cautions Emmie.

Scheduled for a knee replacement operation this month, the 55 year old Corrie (Emmie’s age is a secret) says his loyal owners have stayed staunch, but his  string has reduced this term. He currently has 76 horses and after winning the title two years running, he will finish third behind Cliffie Miller and Bill Human this season. “It gets boring for the public when the same guys are tops year in and year out. So I’m glad for Cliffie Miller and Bill Human. I have reduced my string a little and have slowed down a bit – it’s my knee, it’s a bit of uncertainty and the economy, as you know, is not great. It’s a combination of factors. Racing, like economics, mirrors life – it’s about cycles.”

While Eldin Webber lives in Kimberley and rides work for the Lensleys, they also have a loyal core of stable staff. And they have four lady grooms. Corrie says the maternal instincts shine through and females have a sense of power in the feed-room.

“There are challenges here like everywhere. But we are lucky. Our staff love the horses – when something goes wrong I have seen them cry, like we do. The love of the horse runs deep. With our staff and their families living on the premises, there is a social pathology that applies in most communities. I have had a few ideas for social upliftment in terms of providing better facilities. But it’s all about money and I haven’t yet succeeded in getting anybody to buy in!” says Emmie, who met Corrie when she nipped down ‘innocently’ to buy a loaf of bread at the café in Kimberley years ago. They have three grown up offspring – Lerize, Lean and Lizanne – all who love racing, but studying and forging their own careers.

It’s not easy training in Kimberley.

“Extreme weather – very cold mornings, hot afternoons. And Prieska almost blew past here a few weeks ago! The feed is more expensive as we have to transport it long distances. Then we only race three times a month. So one can’t penalise owners. It’s a fragile financial model. But we aren’t whinging and really wouldn’t do anything else!” says Emmie.

Corrie and Emmie are loathe to talk about whispers of the closure of Flamingo Park. Mainly because they are in the dark.

“Sadly, like so often in life, the people most affected are always the last to know. This is a community and racing didn’t start in 2005 with the refurbishment and renaming of the track. The industry is a part of Kimberley’s history and the role of the Northern Cape as a cog in the wheel of the broader SA racing community cannot be underestimated. We serve a purpose – the only sand racing track and a second career opportunity for many horses,”adds Emmie, who hails from Aliwal North and whose family horse heritage goes back to a Grandfather who enjoyed the dangerous distractions and a life well lived of fast women and slow horses. “I shouldn’t be saying that, maybe! But every family has a history and today we all love the game – and with champions like Horse Chestnut and the like, how can anybody not admire the sport?” asks Emmie.

Corrie grew up in a farming environment near Ellisras and got into racing via his uncle, Boet Horn, a farrier and small-time trainer.  His uncle introduced him to Pat Shaw’s father, Bernie and Charl du Toit who trained for Frik Kroon.  He says his love for horses comes from guys like Willie de Beer and Nick Joubert who were old school trainers.

After his national service, Corrie served an apprenticeship as a fitter and turner on the mines.   A keen rugby player, who played at provincial level for Stellaland before a knee injury put paid to dreams of a professional career, Corrie maintains that “horses were always my first priority.” Corrie and his youngest daughter Lizanne

He joined Bill Human, first as a stable employee and then as an assistant.

Corrie spent a few years in the private sector before rejoining the racing fold and being granted his licence in 2003.  He initially trained from Bloemfontein before moving to a private facility in Potgietersrus, raiding to Bloemfontein and Kimberley.

Corrie has space for new horses and says the team are looking forward to the challenges of the new season.

“We are ready for it. I’m sorting out my knee and hoping to train many winners,” he says, pointing out that Ruby And Roses and Jolly Josephine are his two best runners on Saturday. 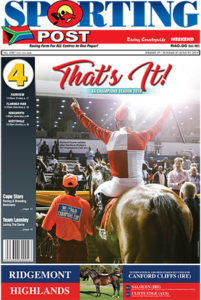 Just Do It Son!

Taking Nothing For Granted!